Previously, on MinerBumping... Agent Aaaarrgg's infiltration of the Anti-Ganking channel offered insight into the minds of the people who continuously nonstop fail daily.

Carebears are shockingly entitled. They truly believe it's their right to mine AFK in absolute safety. 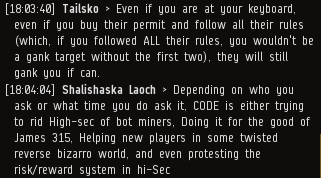 The rebels indulged in idle speculation as to the true motives of the CODE. alliance. 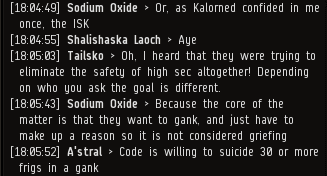 Miners, here's a hint: CODE.'s motives might have something to do with a thing we call the Code.

Shalishaska Laoch accused our Agents, saying they gank people only because "they enjoy hurting people"--but that some are rather decent folk.

Even though the New Order is more transparent than any organization in EVE's history, the Anti-Gankers fell prey to wild rumors and conspiracy theories. Shalishaska believed that the number of people in CODE. has declined (Dotlan says otherwise) and that the "hard-line gankers" have left (if they're hard-line, they make their home in CODE.). Meanwhile, Tailsko still clung to the long-debunked myth that Goons fund CODE. 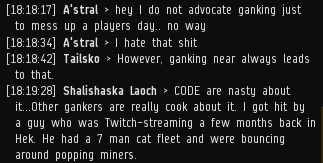 Another common theme among the Anti-Ganking crowd is that ordinary gankers are fine, but CODE.'s gankers are an evil greater than anything EVE has ever seen. Similarly, you often hear the sentiment that Goons aren't so bad compared to CODE. Before the New Order, miners thought all gankers and Goons were evil, so it seems we've succeeded in moving the Overton window a fair bit. 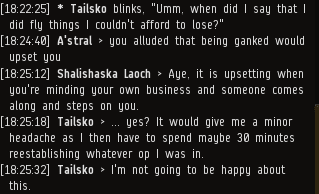 As is inevitable during any conversation in Anti-Ganking, the participants turned sour toward each other.

Tailsko and A'stral started bickering about how miners should respond to being ganked.

A'stral challenged the notion that carebears are completely blameless and responsibility-free when it comes to being ganked. That's an Anti-Ganking no-no. 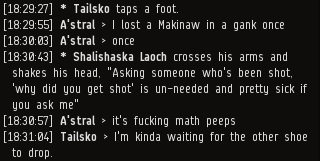 Shalishaska was disgusted by the victim-blaming. On the bright side, this time a rape comparison was not explicitly made. 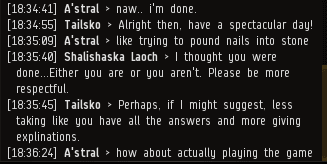 The carebears' argument grew more heated. If you've ever seen a fantastic killmail earned by CODE. and wondered "Where was Anti-Ganking?", this is where. 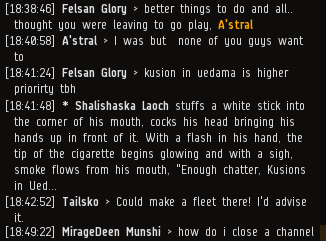 Meanwhile, the Kusion family did as it pleased in Uedama. Another day of failure for the rebels; another day of victory for the New Order!
Posted by MinerBumping at 17:10