Spotting a criminal in highsec is easy these days...

...They start whining in local as soon as an Agent of the New Order appears.

Michael Pergkk tried to talk down to our Agent, but it didn't work. It's hard to discourage the people seated at the pinnacle of power and influence in EVE.

Agent Australian Excellence knew what it means to be a member of the mighty CODE. alliance: We attract plenty of flattery and adulation from the highsec locals who aspire to be like us. But because we stand for something--because we have values--we're naturally polarizing. Some slander us or shout out long-debunked myths.

The ultimate rebuttal to our enemies is simply to be ourselves and enforce the Code. They have no answer to that. 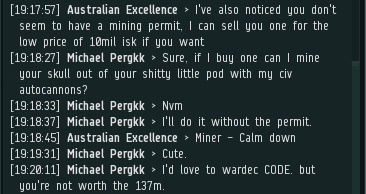 Michael Pergkk was a spent force, and he knew it. It was time for a new challenger to rise up and take his place.

Right on cue, a miner named Dravik stepped up to the plate. He was armed with some nonsense about how important highsec miners are.

Protip: The people who talk the most about how hard they work tend to work the least. The real workers are too busy working to brag about it.

Dravik, who might've passed himself off as a genuine newbie, incriminated himself. He confessed that he'd harbored a grudge against the New Order for two long years. Apparently Dravik thought that we'd eventually go away. But the Code is forever.

The mouthy miner was drawing a lot of attention to himself. Our Agent took note.

For whatever reason, Dravik didn't reactivate his old account. Maybe he'd gotten angry about a gank and biomassed his old characters. Or perhaps his account was permabanned for RMT or botting. Anything was possible.

Dravik refused the order to calm down; he grew increasingly upset. Australian knew this was a problem--the miner's rebellious attitude could spread to others in the system.

One local recognized Australian from the days before he'd joined CODE. Evidently he didn't mind when Australian ganked people before, but now that he was ganking in the name of the Code, it outraged him. The carebears were indeed getting restless. Could our Agent salvage the situation?

To be continued...
Posted by MinerBumping at 19:42