Thou Shalt Not Covey, Part 3

Previously, on MinerBumping... Covey Deninard's life was turned upside down when he met Busty Lady Ereland, a fellow anti-Code rebel who sought his help in attacking Agent Krig Povelli. Covey's Orca was destroyed in battle. To make matters worse, he lost a Bowhead and a freighter when he lent them to Busty Lady and she failed to give them back. Covey was disheartened. Still, there was something special about Busty Lady. When she asked to borrow his new Orca, he met up with her and seemed ready to give up the ship. Suddenly, Covey was contacted by mercs.

Somehow, Covey's mercenary friends knew their buddy was in danger. Busty Lady was shocked. She'd been just moments away from getting her hands on that Orca.

Given these new developments, handing over the Orca to Busty Lady was absolutely out of the question. Covey demanded to be repaid for his Bowhead and freighter. If Busty Lady didn't pay up, Covey would hire the mercs.

Busty Lady pleaded with Covey. All she needed was Covey's Orca. If she had that, she could set everything right. But there was no way Covey would fall for the same trick a third time.

When Busty Lady pointed out that she was in dire financial straits too, Covey couldn't help but sympathize. Once again he saw Busty Lady as a damsel in distress; she was the same rebel firecracker who'd come to him when she needed help attacking Agent Krig Povelli. Covey was willing to give her one final ship.

Covey ejected from the Orca. Busty Lady boarded it and went on her way. Having now received an Orca, Bowhead, and freighter, she'd pulled off the "hauler borrowing" hat-trick.

As Busty Lady made her way back to Jita, she reflected on her relationship with Covey. She was tired of his constant suspicions and guilt trips. He no longer made her happy. Under these circumstances, the only mature thing for her to do was to break ties with Covey and keep all his stuff.

That was the last straw. Covey got ready to hire mercenaries to take his revenge. However, the newly liberated--and contemptuous--Busty Lady didn't think he was man enough to make good on his threats.

Covey explained that he wouldn't have to pay the mercs unless they inflicted a certain level of isk damage against the target. And if that happened, he would be more than willing to cash in his PLEX to pay the contract fee. Busty wasn't afraid. In fact, she claimed to have mercs of her own.

Covey's threats weren't as empty as most carebears'. He made a contract with his merc friends and bragged about it to Busty Lady. Now is the point in our story where things take a twist: Busty Lady immediately hired a mercenary corp called Tax Haven McCorpname to wardec Covey's corporation.

Minutes later, Covey was notified of the wardec against him. He was unimpressed. What he didn't realize is that the mercenaries hired by Busty Lady included someone he knew--none other than Agent Krig Povelli himself! 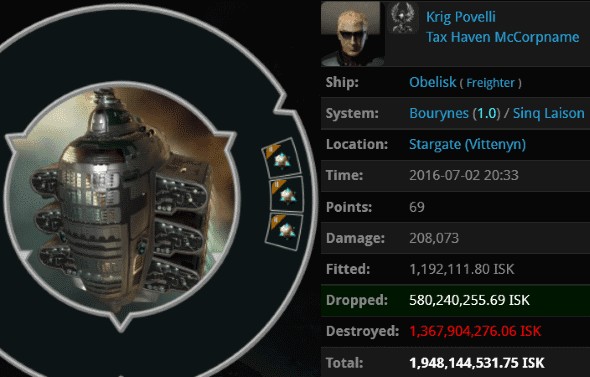 The plot twists came fast and furious: A few days later, Krig Povelli was caught inexplicably piloting a freighter, which was killed by Covey's mercs. What in the world was going on?