According to Gavin Farstrider, people come to EVE for the PvE and quit when they discover they're stuck doing a bunch of unpleasant PvP. Logic like that can only mean it's time for another edition of the Highsec Miner Grab Bag!

Some anonymous carebears--particularly those who post in the comments or on Reddit--claim that they never see our Agents. They say they've spent years mining without ever being ganked. They're anonymous for a reason: their killboards would tell a different story. A story like Shane Markov's.

The New Order is extraordinarily efficient. Carebears can barely set foot in highsec before our Agents take away their expensive, unlicensed toys.

Woe to the miner who thinks he can get by without a permit.

The New Order doesn't discriminate against carebears based on their education level. Some miners are graduates of CODE University, while others got their education from the school of hard bumps.

I received an "urgent" message from James 3I5, but it turned out to be a false alarm. 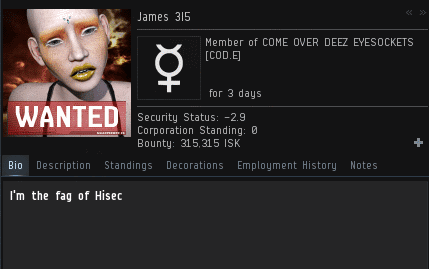 James 3I5, not to be confused with James 3l5 or the other impostors out there, actually sent me a fairly low-priority message. 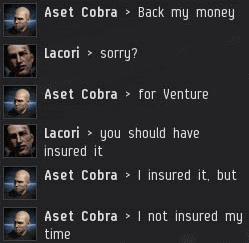 Carebears never stop coming up with new reasons why other people owe them money. 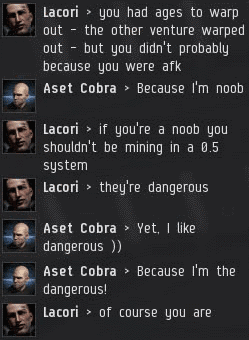 Miners, if you're interacting with an Agent and you don't end up sending them isk, you're doing it wrong.

How pervasive is the CODE. alliance's influence on EVE? Consider this exchange...

Even when a non-CODE. member kills someone in lowsec, CODE. is blamed. At the rate things are going, one day 100% of EVE-related thoughts will be somehow connected to the New Order. 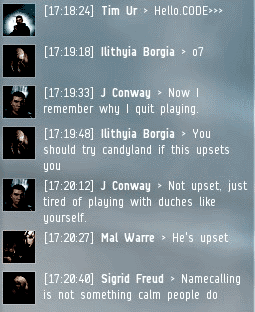 More evidence: J Conway was reminded why he quit playing EVE. Was he ganked? No. He simply saw someone write "CODE" in local chat, and that was enough to make him want to leave the game. What a bigot!

But fear not. Most highsec dwellers are being won over. Our Agents are the most prominent celebrities in the game right now. Can anyone doubt highsec belongs to us--and that we are living in the age of the New Order?
Posted by MinerBumping at 18:54