Previously, on MinerBumping... Agent Australian Excellence commanded the attention of everyone in local simply by entering the system as a member of the mighty CODE. alliance. Upon seeing Australian wearing the CODE. ticker, Dravik became upset. He condemned our Agents and their use of the term "bot-aspirant".

Though Dravik was using a trial account, he claimed that he'd played EVE two years before, apparently quitting due to the activities of CODE. Now the miner revealed that he'd been a permit owner. Unsurprisingly, he had no proof of this whatsoever.

One of the easiest ways to prove that a miner committed a Code violation in the past is to demonstrate that the miner continues to be a Code violator in the present. Dravik's disrespectful conduct toward Agent Australian proved beyond all doubt that if the ganking incident Dravik described did occur, it was deserved.

Dravik racked up more Code violations. His claim of being a Gallant miner in the past grew ever more laughable.

The miner was tired of losing the argument. Now he only wished to be left alone, to illegally mine in peace.

Dravik blocked our two Agents. However, the block function cannot prevent the Code from being enforced--nothing can. Australian placed a bounty of 315,315 isk on the miner.

Minutes later, Dravik unblocked the Agents. On some level he probably knew that he wanted more content.

For whatever reason, Dravik was still hung up on being called a bot-aspirant. He couldn't shake it.

The miner's ranting was getting out of control. Miners, there's a lesson to be learned here: If you don't like being called a bot-aspirant, stop being one. You can't argue your way out of it.

Agent Ralliana suddenly arrived in the asteroid belt and ganked Dravik, cutting him off mid-sentence. 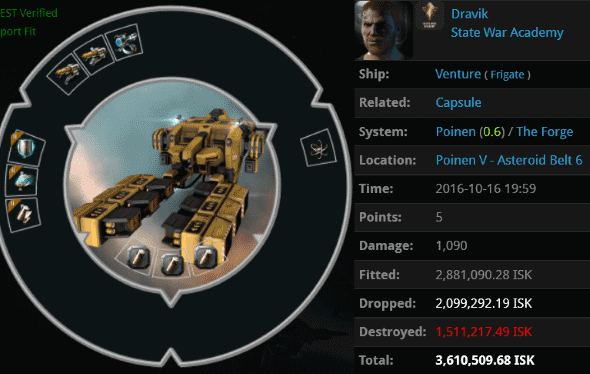 Is this Venture the ship of a Gallant miner? I think not.

Dravik was stunned into silence. Another victory for the New Order--and an extraordinary one at that!

If Dravik takes another two-year break from EVE, he can rest assured that our Agents will still be here, ready to accept his 10 million isk payment.
Posted by MinerBumping at 19:00