The Code, Always and Everywhere

Our Agents really care, and it shows. 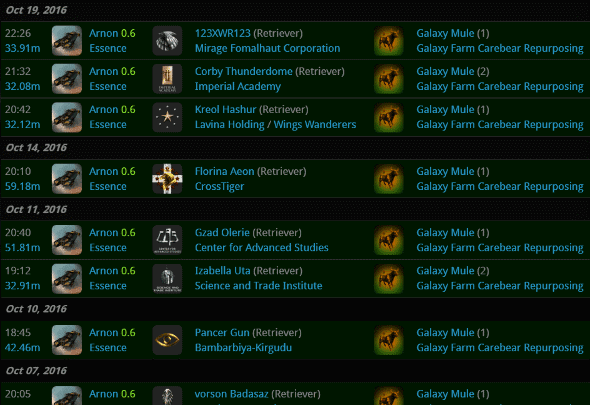 Agent Galaxy Mule once expressed to me her desire to help Arnon the way Kalorned has helped Gamis. And as you can see from Galaxy Mule's killboard, she has given that system a lot of love. 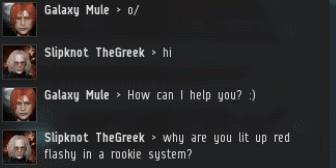 But every story has its villain. 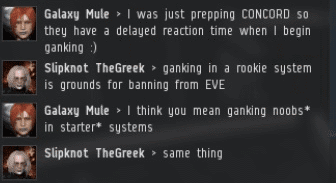 Space lawyer Slipknot insisted that it's against the rules to gank any ship in Arnon--a 0.6 security system, no less! 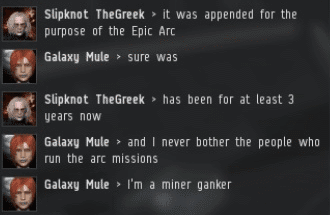 As Slipknot's argument unraveled, he invoked special rules that applied specifically to Arnon. The system was singled out by CCP in an official EVE Wiki article.

Whoops! Nothing to see here.

More recently, EVE's support team updated the rules on rookie systems. Arnon is no longer mentioned by name. Nevertheless, new players in SOE Epic Arc mission sites are not to be ganked. Since Galaxy Mule ganks miners in asteroid belts, she is in full compliance with the rules. Arnon is no haven for illegal mining.

In 12 years, Slipknot has yet to find something constructive to do.

As Galaxy Mule suspected from the very beginning, Slipknot was a dyed-in-the-wool carebear. 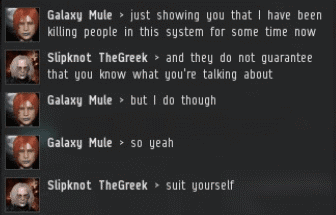 Our Agent could only shake her head at the GM-aspirant. Slipknot didn't know the EULA any better than he knew the Code. 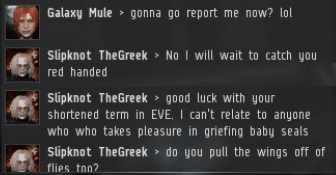 Inspector Slipknot vowed to watch Galaxy Mule like a hawk.

The carebear's anger was a tell: His confidence in his ability to ban Galaxy Mule was waning. 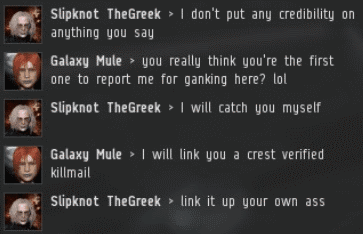 Our Agent offered to assist Slipknot, but he remained as cantankerous as ever. 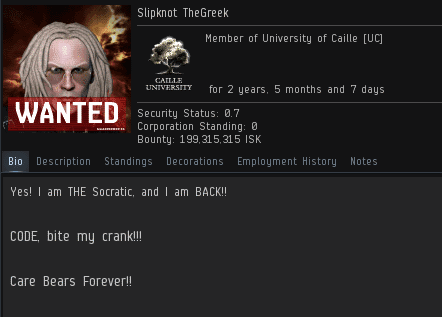 It's astonishing to see the rebels and skeptics choose a path in life that obviously makes them unhappy. Imagine how skilled Slipknot could've become, had he spent the last 12 years learning the art of the gank. Instead, he pouts and fumes in Arnon. What a waste. But there's a silver lining: If he watches Galaxy Mule as closely as he threatened to, he might end up learning something after all.
Posted by MinerBumping at 17:34