Over One Trillion Eighty-Six Billion in Shares Sold

Giving money to cancer charities is always a good idea. And an even better one? Buying New Order shares! 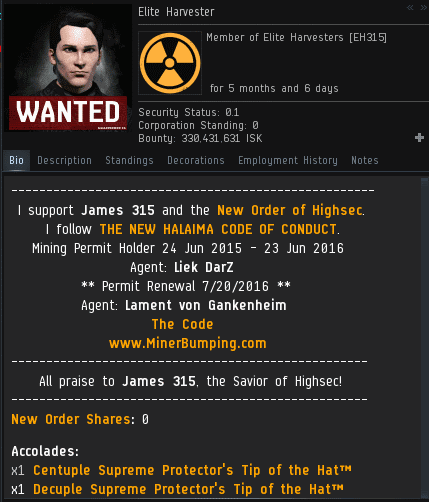 Elite Harvester became a legend with his many high-volume purchases of New Order shares. Last year, he came out of nowhere and bought one hundred billion isk worth of shares in one shot. He instantly made friends all across highsec.

Great question. Let me answer it with another one: Why would anyone want to sell? When it comes to New Order shares, all experts say BUY BUY BUY! One minute before sending this EVEmail, Jerome Vascez made a purchase of 2,000 shares. This sent us over the 1 trillion 85 billion and 1 trillion 86 billion isk marks. Jerome earned a Double Supreme Protector's Tip of the Hat™ and got some great investment advice, to boot.

What a week!
Posted by MinerBumping at 16:07