Everyone has a reason to play EVE Online. For many, it's to save highsec by enforcing the Code.

Others have a less good reason. 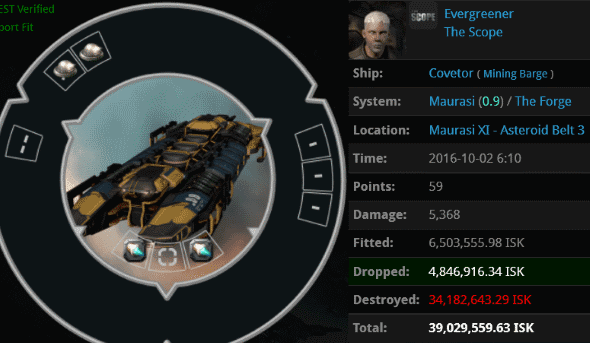 Evergreener was caught mining in a 0.9 security system without a permit. That, combined with the fact that Evergreener belonged to an NPC corp, might lead one to assume that he was a newbie. In fact, he began playing EVE over seven and a half years ago. In all that time, mining in highsec with a fail-fit Covetor was the best idea he'd come up with. Midslot? Lowslots? Who needs 'em? 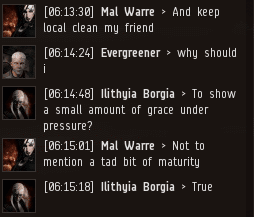 No one had ever bothered to teach Evergreener how to do more in EVE. The miner was lucky to make the acquaintance of Agents Ilithyia Borgia and Mal Warre. 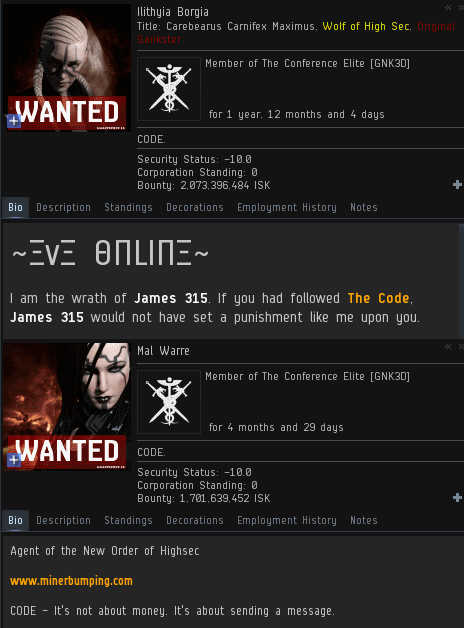 As was already apparent in the conversation unfolding in local, Ilithyia and Mal were simpatico. They were of one mind, completely attuned to the Code and therefore to each other. In the future, all highsec will be like this. Random strangers in Jita will finish each other's sentences. As in:

It'll make for a great atmosphere for new players. 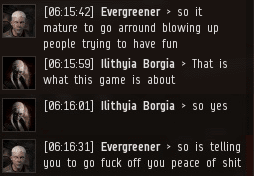 Ilithyia believed (correctly) that EVE is a spaceship combat game. Evergreener felt the right way to play EVE was to AFK mine in highsec in a barely-fit ship, get ganked, and then go ballistic in local. I don't think that's the kind of sandbox CCP intended. More to the point, it's not what I intended. 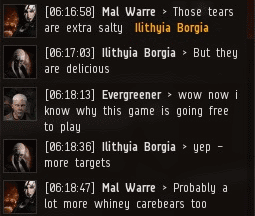 A troubling question for the rebels and skeptics out there: Assuming (contrary to all evidence) that ganking makes people quit EVE, if we truly care about CCP's subscription revenues, should the New Order focus its attacks on people with free accounts? 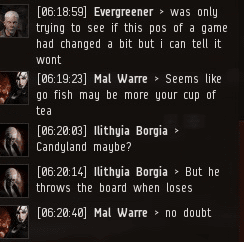 Evergreener was discouraged to learn that ganking still exists in EVE. I suppose he assumed CCP would've nerfed it out of the game by now. 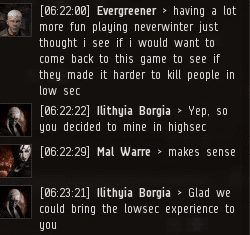 Many highsec miners are ashamed to be highsec miners. Evergreener came up with a new cover story: He was really a lowsec miner. More damning, however, was his admission that he wants CCP to make lowsec safer! 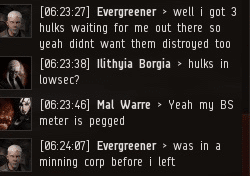 The trouble with being a self-hating carebear is that whenever you lose your ship, you simultaneously get exposed as a highsec miner. It's a double-whammy. 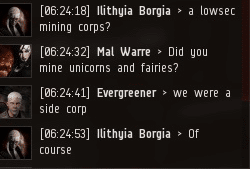 Our Agents didn't believe Evergreener's lies for a moment. I do have to give Evergreener some credit, though: "It was a side corp" sounds like a great all-purpose excuse. 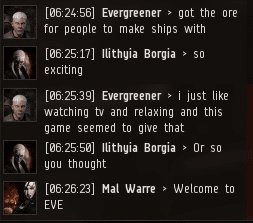