Vrix Nation is a proud member corp of the mighty CODE. alliance. Their specialty? Elite PvP.

The pilots of Vrix Nation are especially accomplished at ganking AFK autopiloting pods--a subset of elite PvP. Roughly 87% of all their kills are pods. 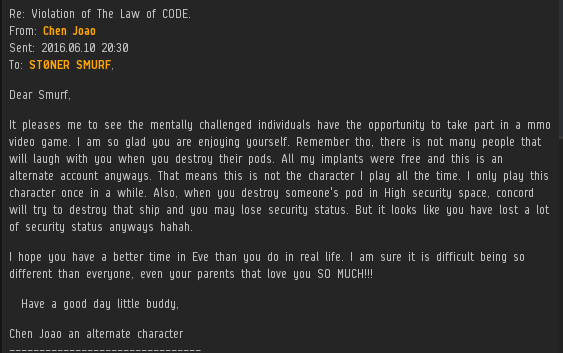 Not every EVE player is a good sport. Chen Joao, for example, tried to excuse his PvP loss, saying it didn't count because he's an "alternate character". If only nullsec had access to this kind of logic. Virtually all supercaps are piloted by specially designated supercap alts, so those kills must not count.

KUN TEWK, too, embraced carebear logic. He claimed that the loss of his pod was convenient, and that our Agent had actually done him a favor by ganking him. He then vowed to get revenge for this favor.

Needless to say, the Agents of Vrix Nation have heard a lot of excuses and complaints over the years. They're not interested in good excuses or valid complaints, because there are none. What they're looking for is contrition--some sign that a carebear has the potential to become a Gallant.

TrueRoyalty's ego could not absorb the lesson he should've learned.

One of the great things about the New Order is that our Agents are not prejudiced or bigoted in any way, shape, or form. That having been said, we all know that if a random EVE player sends you a message in Russian, it's not going to be friendly. According to Google Translate, this message reads, "you fucking cock." But you probably could've guessed something along those lines.

Sometimes Google Translate gives us gibberish, such as: "Not only you fat American Hitler arson just such geeks born." On other occasions, the message provided by Google Translate is surprisingly readable:

"YOU a fucking whore I fucked your nurse with thousands of Chechens."

A carebear may respond with a very brief message to express his anger... 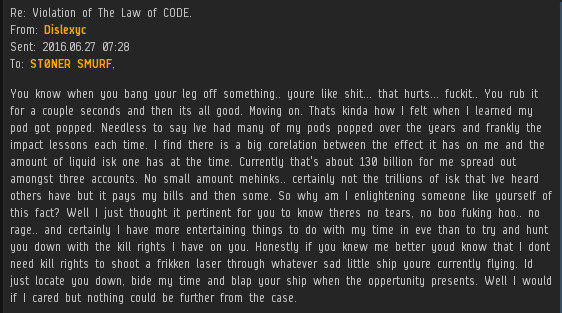 ...and other times, carebears send longer messages--to express that they're "not angry".

Dislexyc's EVEmail went on as he encouraged our Agent to change his ways. Of course, we know that the angry EVEmail writer who just lost his pod is the one who needs to reform. The Code is waiting for him, if only he'd read and obey it.

At last. The ganking of thousands of pods is justified if even one EVE player can be nudged in the right direction. Could our Agents find another?