What a Goofus. Welcome to the latest edition of the Highsec Miner Grab Bag! 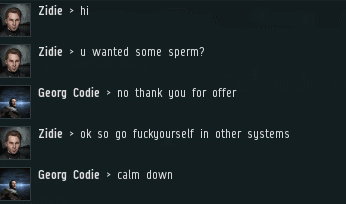 Agent Georg Codie is new to the New Order. As soon as he enlisted, he found he had to learn the strange customs of the bot-aspirant miners.

Georg is doing outstanding work. People say EVE is dying, but there are always new players joining CODE.; the game's future is safe in their hands. 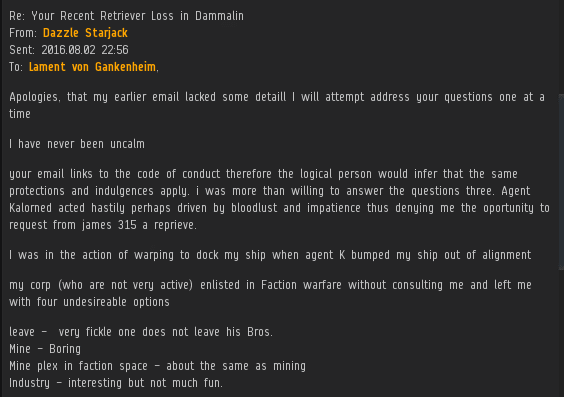 Dazzle Starjack had a lot of grievances. He began by complaining about Agent Kalorned's "bloodlust". Then he started talking about his own problems, as if they're ours.

...And it ended with a request for money. If you have any doubt that his request for reimbursement was without merit, read the follow-up: 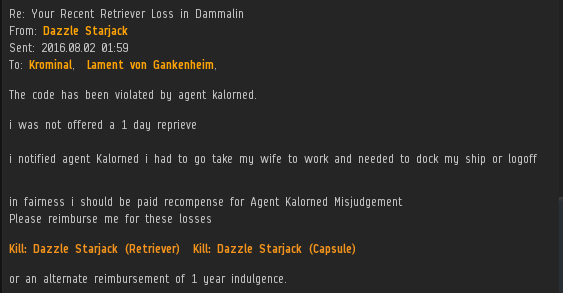 Taking his wife to work indeed. Can you imagine if our Agents had the same attitude? "Miner, could you please hold still and self-destruct your ship? I'd gank you, but I have to take my wife to work." Highsec would never get saved!

Robin Davaham couldn't be bothered to construct an intelligible tearmail, so he simply picked random bits and pieces of one and threw them together. 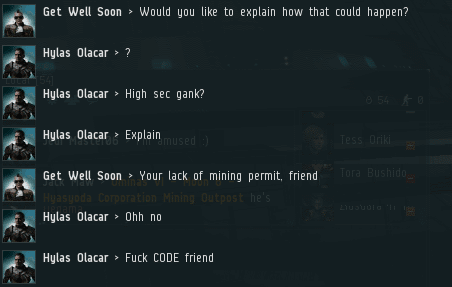 CODE.'s branding is powerful. To the extent that there are non-Order groups ganking, their actions are mostly ignored. But when someone is ganked in the name of the Code, people take notice.

Uh, I believe the word you're looking for is democracy. 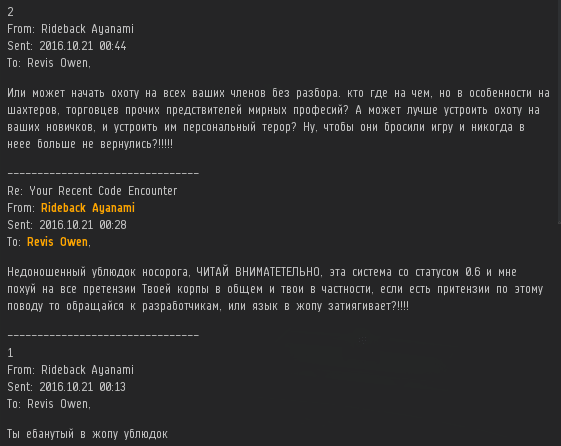 Rideback Ayanami sent our Agent a series of three different tearmails in Russian. As each one was translated, the evolution of the Russian carebear's complaints became clear:

First, quick-and-dirty profanity prepared in the typical Russian manner. Next, expanded and difficult-to-translate tears with a strange animal reference and a threat to file a petition. Finally, in the last EVEmail, we see the adoption of the modern carebear's tears: Claiming we're killing EVE by driving away new players! That fallacy has truly gone global.

Fubar Acami, I'm afraid you don't "get" the sandbox.

Having failed to include player ships in his overview filter, darkeruption was bound to die. Playing a PvP game and making your fellow players invisible is a bad idea. Fear not--our Agents are teaching people how to play EVE the right way. The Code way.
Posted by MinerBumping at 21:48