Thou Shalt Not Covey, Part 5

Previously, on MinerBumping... Love was dead in highsec. Covey Deninard vowed endless revenge against Busty Lady Ereland, whom he now believed to be an alt of Agent Krig Povelli. Busty Lady hired Krig Povelli to declare war against Covey's corp; in return, Covey hired mercenaries against Krig. Covey was on top of the world when he heard that Krig lost 10 billion isk after the mercs attacked his freighter and triggered a massive collateral payment on a courier contract. But things were not as they seemed. 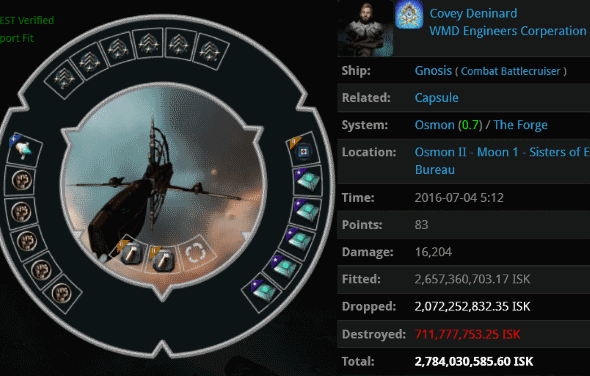 Covey was more than happy to pay his mercenaries for apparently dealing so much damage to Krig Povelli. He was less pleased when a member of Krig's corp--still at war with Covey's--dropped by Osmon to say hello. Covey lost a dubiously fit 2.7 billion isk Gnosis.

How do you like our war so far?
You may have messed up my haul in that freighter, but I am going to show you. I bought some PLEX and I have made an offer to your precious [REDACTED]. Your days are numbered. You thought you have ISK? I have ISK too.

As Covey was still reeling from his loss, Krig dropped another bombshell: He was planning to bribe Covey's mercs to switch sides!

Alerted to the possibility that he might get out-bid on the merc contract, Covey remained strangely calm. Something was up.

It was Covey's turn to drop a bombshell. His mercenary friends had forwarded to him all their communications with Krig:

I am tired of hiding and getting blown up by you guys over some carebear, so I am going to make you a deal. I don't know how much he paid you, but I have a lot of ISK. You are mercs so I know the deal. I will pay 10 billion ISK to dec him now that our war is over.
I will even help in the war. He flies shiny gnosis and has hauler alts. You guys can even keep all of the spoils from the war.

Krig's offer to Covey's mercenaries had been 10 billion isk to switch sides. Was it enough?

No, sorry we are a respectable alliance and we don't work for that cheap, you will need to offer a bit more for us to end the contract with other party. Make a better offer.

The mercenaries were too honourable to abandon their allegiance for a mere 10 billion isk. They demanded more.

Fine. I had to buy some PLEX to sell and this is the max I can come up with. I don't have any more ISK or ships to sell. I want this guy dead. Please work with me. 18 billion to hire you, and that is making me broke. I will have to wait until next month to get more ISK.
Please.

Krig then made the generous offer of 18 billion isk. Surely Covey wouldn't be able to offer more than that hefty sum?

Apparently he had. Now it was time for Covey to gloat.

The triumphant Covey sent another EVEmail to Krig to announce his victory. He'd won--with heart.

Or had he? The price of his imagined victory had been steep. In order to out-bid Agent Krig, Covey paid 25 billion isk to the mercenaries. In appreciation, the mercs promptly sent 10 billion of that to Krig Povelli.

They had been working together the entire time. 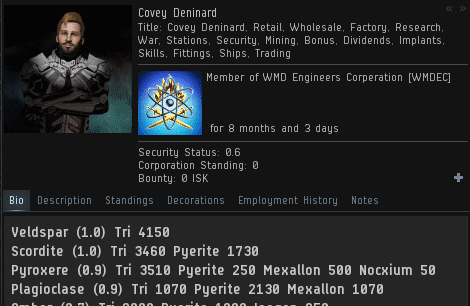 Covey Deninard chose the life of an anti-Code rebel. A rebel's lot is never a happy one: Covey lost an Orca in battle; he gave away a freighter, Bowhead, and another Orca to Busty Lady; he paid mercenaries to inflict 10 billion isk in damage that turned out to be illusory; he lost a 2.7 billion isk Gnosis in a wardec; he paid another 25 billion isk as part of a bidding scam. He'd also lost his faith in the goodness of his fellow rebels.

From the start, Covey could've chosen to buy a New Order mining permit for 10 million isk and obey the Code. Rebels, trust me when I tell you it's the better option.
Posted by MinerBumping at 16:19