Previously, on MinerBumping... The Vrix Nation corporation took up a monumental task: To locate potential Gallants hidden away in the wasteland of AFK autopiloting pods. Our heroes were completely dedicated to their mission, no matter how many pod gankings it would take.

Fortunately, the more hardened bot-aspirants announced themselves--loudly and clearly, even if not intentionally.

Highsec miners aren't the only Goofuses in highsec. Autopiloters tend to be a surprisingly nasty bunch. They hide behind all manner of excuses.

"EVE is rigged! The New Order must be cheating," says the carebear who can't believe he was killed by CODE.

Ina Olha took the "Loss already replaced so I don't care" route. But on the other end of the spectrum...

Way back in April 2015, Elena Byrne demanded reimbursement for her pod loss.

Many moons later, Elena still hadn't gotten her implants back. 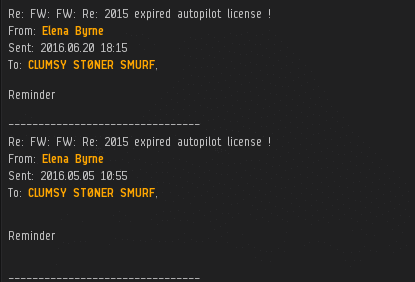 She's still waiting. Hers is a hopeless case, but at least she's honest enough to admit that she cares she was ganked.

While all highsec miners know on some level that they're carebears, autopiloters consider themselves a cut above. Wriggles McNaughty fancied himself a nullsec PvP'er, even though he'd just been defeated in elite highsec PvP.

When a whole six minutes passed without a reply, Wriggles fired off another angry EVEmail. Sorry, but this is highsec. Our Agents only send replies when they feel like it.

...and the myth that I don't have authority over all in highsec. (That one's the most outrageous--and dangerous, for its adherents.)

Successful pod gankers are almost always natural optimists. To hold out hope of finding intelligent life after receiving so many nonsensical EVEmails, they have to be.

But just when it seems that highsec is fresh out of Gallants... 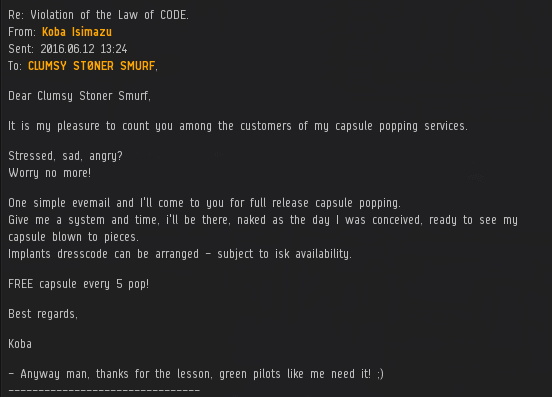 ...there's a glimmer of hope. Koba Isimazu took his pod loss in stride. He even admitted that new players need ganks the most! What a remarkable denunciation of the pro-carebear, Anti-Ganking philosophy. And what a victory for the Code!
Posted by MinerBumping at 17:30