Sometimes it feels like carebears use a random number generator when fitting their ships. 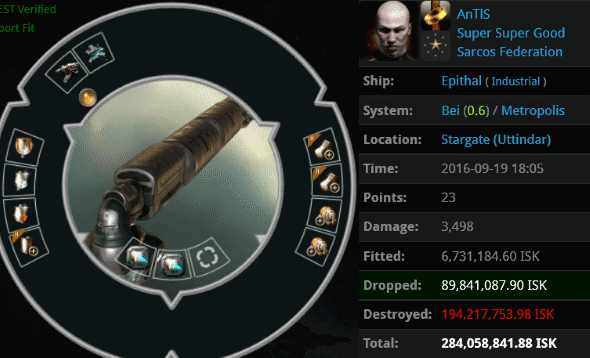 AnTlS put zero effort into designing his hauler fit. He grabbed some random modules and was off to the races. AnTlS assumed he could travel AFK through highsec just as effortlessly. Agent Semtex Attor and his gank Vexor proved the carebear wrong. 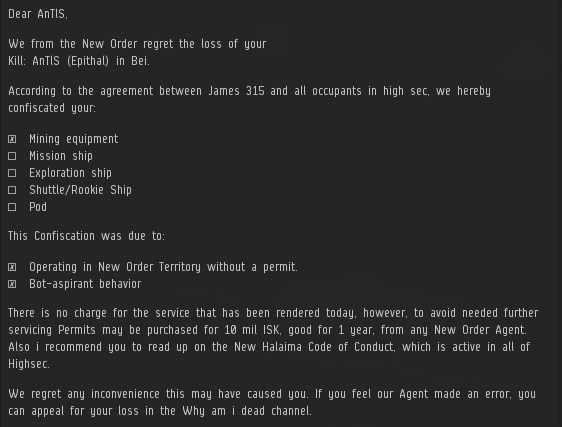 There was absolutely nothing objectionable whatsoever about Semtex's form EVEmail, but the Anti-Ganking crowd would probably say Semtex forced AnTlS into wishing cancer and death upon him. 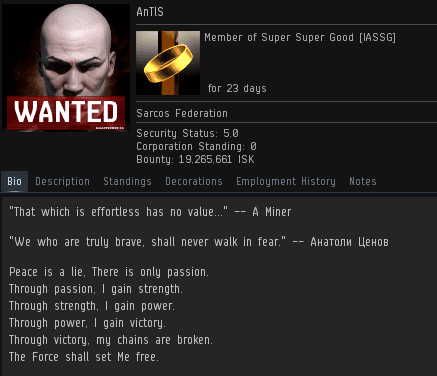 Regardless, it was time for the moment of truth. To be sure, the initial response from AnTlS had been disgusting and uncalled for. We've come to expect that from carebears, sadly. But now the carebear had been invited to calm down. Very often, it's a carebear's second EVEmail that tells you who they really are. 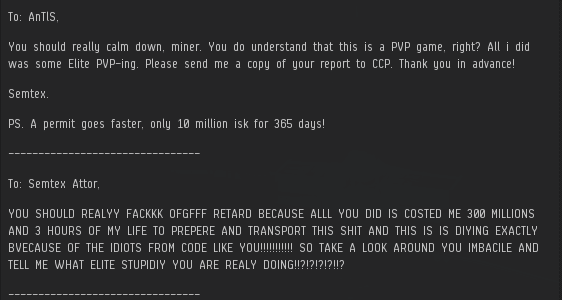 The carebear became furious. He accused Agent Semtex of stealing three hours of his life. Yet we all know that AFK gameplay isn't gameplay at all. AnTlS almost certainly didn't spend those three hours at his keyboard, or else he wouldn't have been ganked on autopilot. 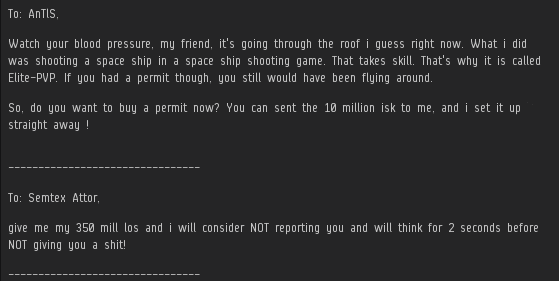 A great example of the difference between Agents and bot-aspirants: Semtex cared about the health and well-being of the person he'd ganked. AnTlS only cared about money. Semtex brushed off AnTlS' attempt to blackmail him (and they accuse us of extortion?). So the carebear fired off another reply:

It may take a lawyer years of studying to earn a law degree, but becoming a space lawyer takes no time at all. AnTlS had just entered the profession and was already 100% certain that shooting haulers in highsec is against the EULA.

People who accuse our Agents of griefing, taunting, and bullying don't know the meaning of those words. In reality, New Order Agents are breathtakingly polite and helpful--despite facing outrageous insults. Semtex gave AnTlS a link to CCP Phantom's post about the Golden Rules of EVE. Phantom's post included the following:


Be able to afford a loss

* Never fly something (or with something in the cargo) you can't afford to lose. Yes, not even in highsec. Meaning that you should not fly a ship you cannot afford to replace and refit.

* You consent to PvP when you click "undock".
* You are not safe in 1.0 security space. CONCORD is there to punish, not to protect. Get used to the idea.
* In most cases, the only way to be 100% safe from aggression inside the game is to be docked in a station. Being cloaked in a secret safespot could work too.

Our Agent hoped that once AnTlS read CCP's official position on these matters, the carebear would abandon his plan to file a frivolous petition. 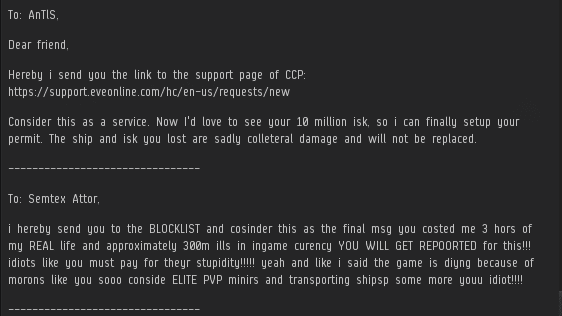 Incredibly, Semtex was generous enough to help AnTlS figure out how to file a petition. The gesture didn't impress AnTlS, who intended to repay our Agent's kindness with an attempt to get him banned from EVE. At times like these, you wonder why carebears never stop and question whether they're the bad guys.

Semtex knew that only a direct communication from CCP itself would be enough to persuade AnTlS that people are allowed to shoot spaceships in EVE. If and when the carebear ever got a response to his petition, Semtex would be ready to receive an apology--and 10 million isk.
Posted by MinerBumping at 17:20