It's About Making an Impact

Miners complain that ganking is too simple, that it's too easy to master. Highsec mining, of course, is infinitely more simple. That fact on its own would be enough to damn the miner as worse than a hypocrite. But even that would be too kind, because miners don't master highsec mining. 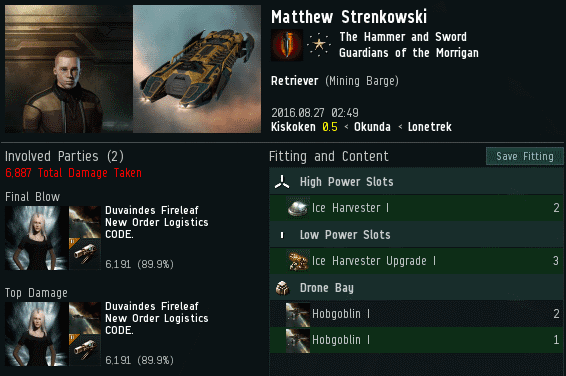 While on patrol in Lonetrek, Agent Duvaindes Fireleaf executed a flawless gank of Matthew Strenkowski. Though mining in highsec is easier than ganking, Matthew couldn't get that right. One look at his Retriever gives it away.

Nearly an hour later, Matthew was still steamed. By name-dropping me, he at least signaled that he wouldn't bother with the tiresome "nobody warned me about the Code" routine so many miners use.

After the most gentle probing of the miner's psyche, Duvaindes already detected signs of nihilism.

Our Agent's suspicions were quickly confirmed. Matthew was a poster child for learned helplessness. Duvaindes was overcome with compassion for the miner.

The Code encourages EVE players to take responsibility and exercise control over their own gameplay experience. Duvaindes tried to show the nihilistic miner that there was a whole world of options open to him. He could find happiness in the Code. 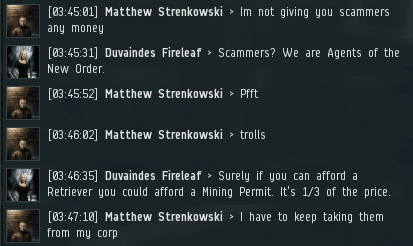 The more Duvaindes investigated Matthew's case, the more pathetic it appeared. Matthew had become a leech on his own corporation. Interestingly, he was willing to take one Retriever after another from his corp, but he wasn't willing to ask for some isk for basic fittings or a basic New Order permit.

A new door opened for Matthew. Duvaindes offered him the most exciting opportunity he'd ever get in his life.

Duvaindes was astonished by the miner. It was as though Matthew sought out misery.

Matthew's attitude was puzzling. He seemed to understand that EVE offered a depth that other games don't, but he wasn't willing to take advantage of it.

The miner claimed to enjoy the occasional PvP, but our Agent doubted him.

It was time for Duvaindes to deploy the Truth Bomb.

Some carebears find our Agents' lectures to be harsh and condescending. Wrong on both counts. Our Agents live in reality, a vibrant place with bright lights that only sting the deadened eyes of those cocooned in bot-aspirancy. If you catch my drift. 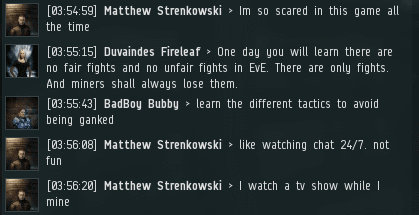 Matthew hated the idea of watching local chat; it distracted him from watching television. He never had any interest in fully engaging in EVE.

Though Duvaindes' heart continued to swell with compassion for Matthew Strenkowski, it was time to move on. So many other miners needed her to make an impact on their game.
Posted by MinerBumping at 20:02