Previously, on MinerBumping... Agent Bob the Fourth tried everything he could think of to reach Ynohtna Sirrap Leusten. Bob tried killing him, ganking him, destroying his ships--nothing worked. But the miner's silence was finally broken after Bob confiscated Ynohtna's illegally mined ice from non-secure containers. The miner spoke, but would he buy a permit?

Well now, that wasn't too painful. The hard part was getting him into the convo.

When someone says "This had better not be a scam," it means he's about to open his wallet. After all, if he wasn't going to pay you, it wouldn't matter to him whether you're running a scam or not.

Everything was going smoothly so far--especially considering how many months it had taken to get Ynohtna to this point.

When someone says "okay" repeatedly while being given instructions, it doesn't always inspire confidence. Somehow, Bob sensed that Ynohtna was going to have trouble following directions.

First, the miner sent 1 million isk instead of 10 million. It was an innocent mistake; Ynohtna had misplaced a zero. No matter. The miner simply needed to send an additional 9 million.

Aha, so there's the zero that went missing. Ynohtna struggled to transfer the required isk, but he got there in the end. He spent 91 million isk on a 10 mill permit.

Cynics say that miners only make clerical errors in their own favor, but there's actually a rich history of carebears overpaying for things by mistake. Years ago, during the pre-Code era, I ransomed a highsec miner for 90 million and he accidentally sent me 900 million instead. I demanded that he transfer 90 million, like I had originally asked. When he refused, I killed him. The miner complained that 900 includes 90, so I told him I would reimburse him if he could convince the general population of the official EVE forum (which was more active at the time).

The miner was eager to get his money, so he created a thread on EVE-O about the situation.

I rendered my verdict, which was to keep the 900 million and not to reimburse the miner. Aside from the "meh seems made up" crowd, most EVE players agreed that the miner was wrong to expect reimbursement of an overpaid ransom. Despite a noteworthy dissent by Chribba, that precedent still stands today. 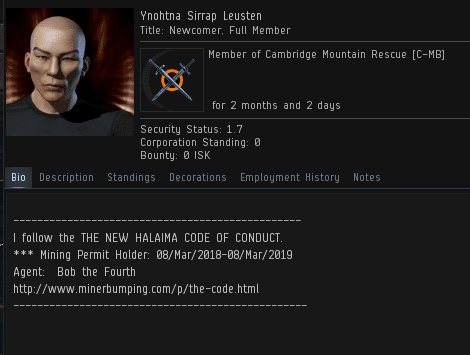 Back to the matter at hand. Ynohtna received a mining permit from Bob. In keeping with highsec custom, our Agent kept the 81 million isk over-payment. Bob didn't require the miner to send exactly 10 million as an additional transfer for the permit, though he could have.

Agent Bob then returned to local chat to trumpet the ascension of a new permit-holding miner. 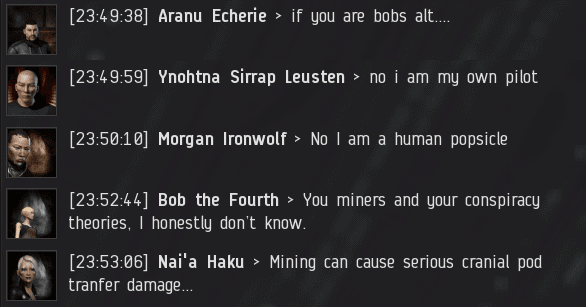 As usual, denialists questioned whether Ynohtna was a real miner. Maybe Bob had created him in 2016, spent countless hours mining in highsec, and allowed himself to be repeatedly ganked, all so he could pretend that one more miner had purchased a permit for 10 million isk? 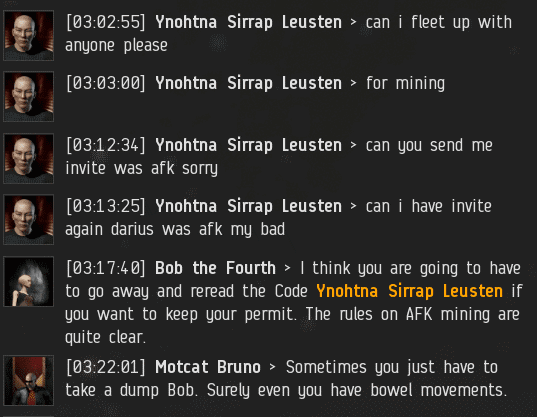 Later, Bob stumbled upon evidence that Ynohtna might be dishonouring his permit. 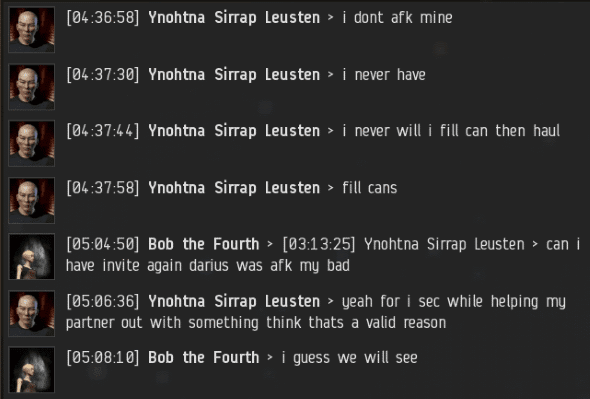 Miners, don't forget: A permit is where Code-compliance begins, not where it ends. Our Agents are always, always, always watching you. Which should be a comforting thought, unless you have something to hide.