Let's see what the Anti-Gankers are up to, shall we? Surely they've learned something in the last few years.

Hmmm... An aspiring "leader" of the Anti-Gankers bragging about tackling a suicide gank ship, followed by a fellow carebear getting confused for no apparent reason, followed by an accusation that an Anti-Ganker is actually a spy. In other words, the same old nonsense.

The Anti-Ganking channel is a sad place. It's filled with toxicity and helplessness, except when it goes silent for hours at a time.

Grand Design considers himself an ace Anti-Ganker. Although he's not so good at preventing ganks, he's an expert at detecting CCP's efforts to buff ganking. (Remember, Anti-Gankers view the world in reverse.) However, even someone as gifted as Grand Design can't be a leader unless he has someone to lead.

After being ganked a few times by the mighty CODE. alliance, Majestic eventually received a communiqué from the Anti-Gankers, who brought him to their channel. He was eager to lend his strength to the cause. (When it was more convenient, that is.) 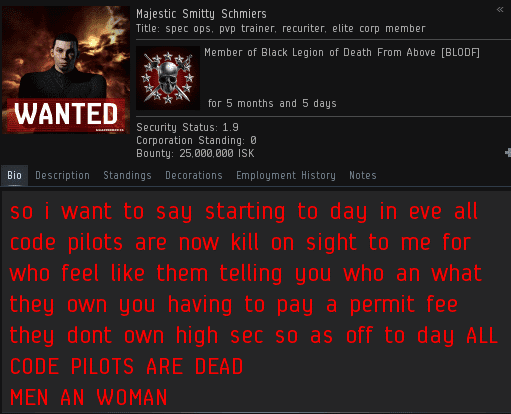 Majestic Smitty was the prototypical rebel-in-training. On the surface, he did not appear to be a great intellect. Underneath that incoherent bio, though, was a stone-cold killer: Okay, so maybe he wasn't so good at PvP. Yet. That's where leaders like Grand Design come in.

Majestic was in a hurry. He wanted to get up to speed on how to fight back against the New Order. For now, he'd need to patiently wait until more senior members of the organization finished moaning about their defeats.

Most members of the Anti-Ganking channel spend their time complaining about losses. Not Grand Design. He was consumed by his ambition to lead the anti-Code resistance. And he knew that to become top dog in a competitive venue like this, he'd need to bring home the bacon.

Despite having received nothing of value from the channel, Majestic appeared to be a state of perpetual ecstasy. And he wasted no opportunity to suck up to what he assumed were his superior officers.

In fact, Majestic's behavior was so cloying and cringe-worthy that one had to wonder: Was he really a CODE. spy pretending to be stupid?

On the other hand, Majestic fit right in among Anti-Ganking giants like Grand Design. He, too, had a persona that was almost too much to be believed.

Perhaps the carebears of highsec are such Goofuses that their antics are indistinguishable from parody?