The Ink Wasn't Even Dry Yet

Someone was in a hurry. 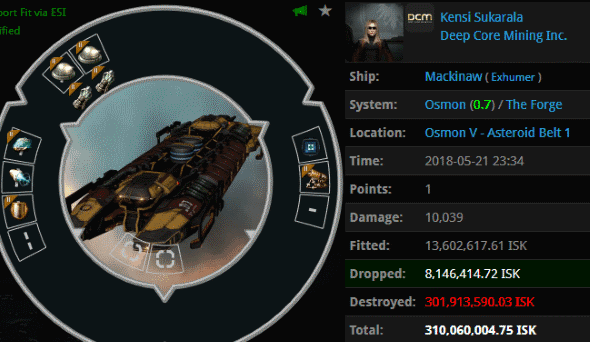 Kensi Sukarala didn't have time to fully equip her Mackinaw before she brought it to an asteroid belt in Osmon. I guess there was a mining emergency or something.

Most egregiously, Kensi failed to equip a mining permit. Agent Lawrence Lawton terminated the vessel and offered the miner instructions on how to mine correctly.

In his time as an Agent, Lawrence has sold over 4 billion isk worth of permits. He knows all the excuses by heart.

Though mining permits have always cost 10 million isk, they've never been easier to sell. Highsec is filled with licensed miners these days.

Anti-Gankers make themselves miserable every time they fail to stop a gank. The only thing that might make them even angrier is when they see a miner buy a permit.

Kensi was still a miner in a hurry. She wanted to get her bio updated and return to mining as quickly as possible. In her haste, she became sloppy--letting a comment slip that she probably shouldn't have.

Lawrence's keen instincts detected something wrong with this newly licensed miner. She seemed to have a very "transactional" view of the world. Like the only thing that mattered was the exchange of money.

Nothing could be easier than buying a permit and installing it in your bio. Yet Kensi struggled.

The miner failed to realize that Lawrence was still monitoring Osmon local. For someone who said she never talked, she was spreading a lot of heresy in local chat.

Kensi admitted that she didn't like the Code very much, but claimed she was willing to submit to it anyway. Miners are, of course, required to submit to the Code, but they're not supposed to have a bad attitude about it. We want miners to be happy and compliant. Both elements are required.

The allegedly taciturn miner kept talking her way into more trouble. And wait a minute, didn't she say she had trouble speaking English?

Kensi wanted to properly format the mining permit in her bio, but it was too late for that now.

Once again, a Goofus with a permit ended up getting it revoked--in record time. It's not easy for a bot-aspirant to impersonate a real EVE player!
Posted by MinerBumping at 18:30