Previously, on MinerBumping... Agent Siegfried Cohenberg's hauling consultant business was booming--and so were the freighters. When one of Siegfried's clients went boom, our Agent came under verbal attack from the pilot's corpmate, Barf Nader. Barf blamed Siegfried for his friend's freighter loss, and nothing could calm him down. 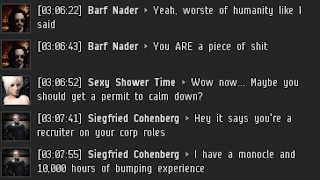 Siegfried happened to be between corps, and he expressed an interest in assisting Barf's alliance on an ongoing basis. 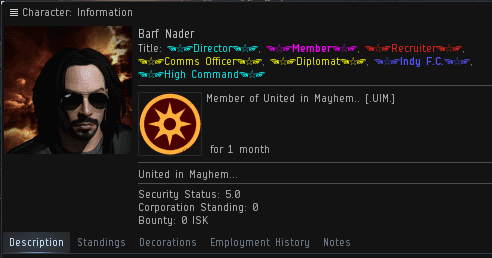 Despite his erratic behavior and volatile temper--or perhaps because of it--Barf was in a position of leadership in his corp. If Siegfried really wanted to join the corp, first he'd need to win over Barf.

Barf was candid in his assessment of the freighter bumper.

Although his candidacy for membership in Barf's corp got an icy reception, Agent Siegfried knew his value. Any group would be lucky to have him.

As we're often reminded, EVE is a (PvP) sandbox game. There are many different ways to PvP someone in EVE. Siegfried's methods are distasteful to some, but no one can doubt their effectiveness.

Barf wasn't in a hiring mood; apparently it had something to do with his friend's freighter being blown up. Still, Siegfried was confident that everything could be made right.

Siegfried again extended an invitation to have a conference on TeamSpeak. Previously, Barf had expressed anxiety about what sort of things might go on during such a meeting. Now, for the first time, he was willing to entertain the idea. 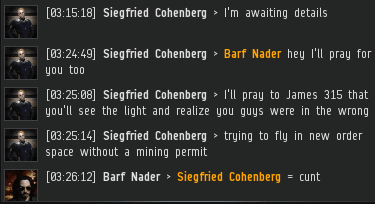 However, Barf soon got cold feet. Siegfried tested the carebear by name-dropping the name of the Saviour of Highsec. It got immediate results, as always.

Niarja local continued to be treated to Barf's monologues about Siegfried Cohenberg. Our Agent was the subject of Barf's thoughts and prayers, but not in a good way. 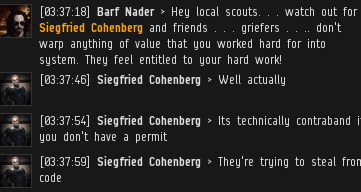 Suddenly, a new plan dawned on the carebear: Maybe he could ruin Siegfried's operations by posting warnings in local. On the other hand, freighters tend to be oblivious. I mean, how many years have freighters been blowing up in Niarja? 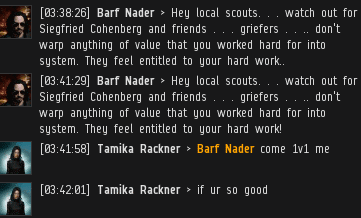 Barf's plan failed. The only attention he was attracting was the wrong kind. 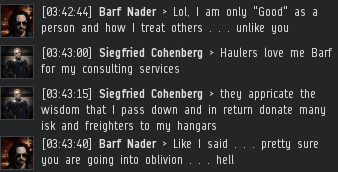 The rebellious carebear cursed Siegfried. In fact, Barf seemed to be attempting to cast literal curses on the Agent. 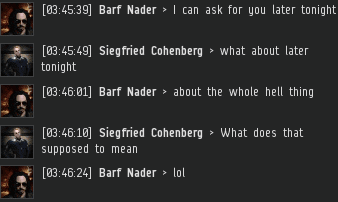 As it became clear that Barf had no intention of leaving Niarja until he was satisfied, Siegfried could only wonder what tricks he still had up his sleeve.