Just as the sun rises in the east and sets in the west, the New Order always gets its due. 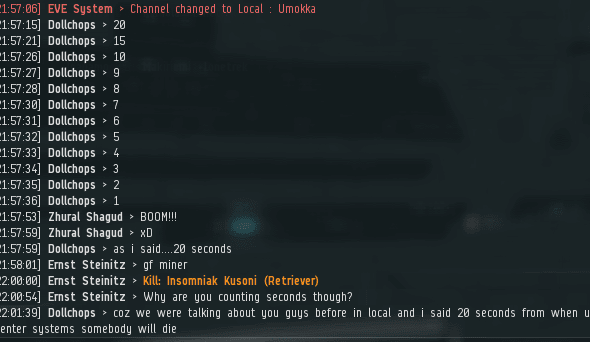 You can almost set your watch by it. Every two weeks, another edition of the Highsec Miner Grab Bag!

Like Negan, I am firmly in the anti-zombie camp. Among highsec miners, that's a controversial position to take. 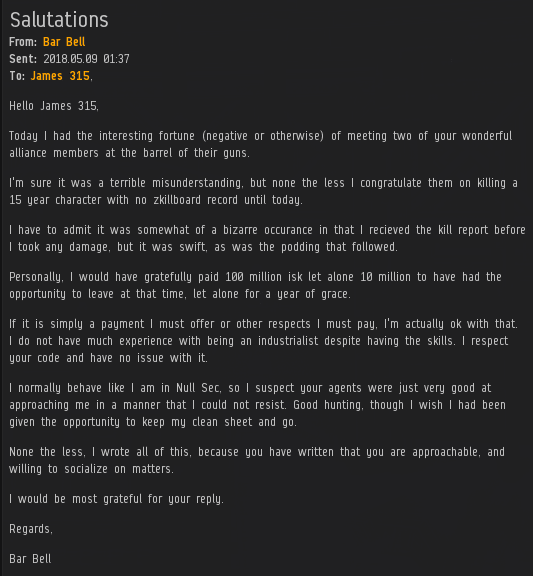 It's early in the Grab Bag and we've got a lot more stuff to get to, so why don't you send me that EVEmail in fewer words, and I'll get back to you?

Sometimes miners can be a little cryptic. Agent Minx Mattel asked for clarification by EVEmail...

Clarification tends to make a miner more vulgar, though.

Our Agents are incredibly open and welcoming to non-English speakers who play EVE. Most people ignore, ostracize, or segregate them. The New Order appreciates them for their unique talents and idioms: 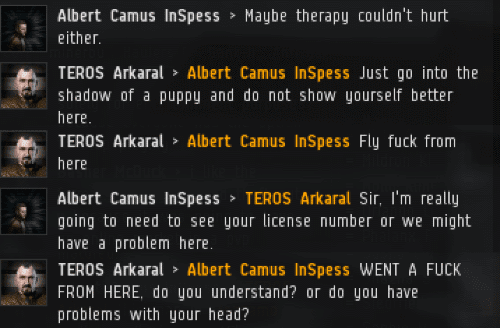 If the Code did not exist, you probably never would've heard the expression "go into the shadow of a puppy". Remind me again why carebears want to abolish the Code?

...Miners, as you can see, are not so inclusive.

It was Breadofdead Sinulf's first day, and our Agent ganked him. The rebels would undoubtedly point to this as evidence that the New Order kills newbies. However, it turns out that Breadofdead had actually been playing for nearly a month, not a day. Never trust a miner.

Another common complaint is that we "force" people to put things into their bio. In fact, it's the rebel miners who get the most touchy about the content of other people's bios. MI-ONE19 Blade was triggered when she saw a miner with a mining permit.

Our enemies really need to make up their minds: Are they innocent, defenseless newbies--or unstoppable killing machines?

What a shame. We really needed that guy in our community.
Posted by MinerBumping at 18:40