Some people are content to let injustice slide. They sigh, "Why bother? What can I do?" 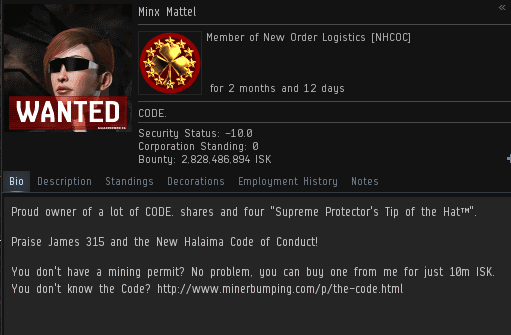 ...And then there are the Agents of the New Order of Highsec. Our Agents are men and women of action. Minx Mattel saw an unlicensed miner and ganked him. She made justice happen.

The miner in question, tonus Yotosala, was disoriented after the attack. Partly it was because he wasn't used to losing ships in highsec. Also, he was buzzed.

One of the weird things about highsec carebears is that they expect to be reimbursed for their losses, even when the idea hasn't been suggested by anyone. They really think someone will pull off a perfectly good gank and then spend a bunch of money to pacify the guy they killed. Needless to say, that's not EVE.

When tonus heard about the Code, he threatened to file a petition. You know, CCP's resources are limited these days. The last thing they need is to spend time reading complaints from a bunch of drunks.

The miner considered moving elsewhere, yet he remained in place. It's just as well, since the mighty CODE. alliance has 100% coverage of highsec.

Hoping to sober the miner up, Minx name-dropped the Saviour of Highsec. It put tonus in an even worse mood. An intoxicated Goofus!

Minx urged the miner to purchase a permit, but there was a danger here: tonus might not even remember their encounter the next day. Then she'd have to explain the Code all over again, and request another 10 million isk.

tonus had mined and wined all night, and now he was whining, too. However, there was a glimmer of hope: Might tonus truly choose a better path--or was it the sauce talking?

Agent Minx realized that the miner was too numb to feel the searing truths of the Code. He was feeling no pain. He might need to lose additional ships to get the point.

tonus stumbled his way out of the EVE client so he could go pass out somewhere. When next he awoke, he would have a lossmail and a hangover. The best cure for both of those things? The Code.
Posted by MinerBumping at 18:01