Behind (almost) every good freighter killmail is a bumper. 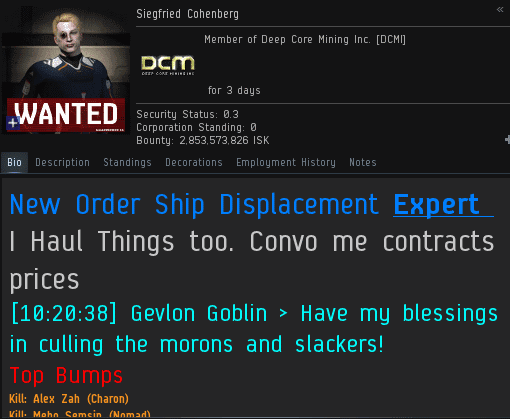 Agent Siegfried Cohenberg is one of the most celebrated bumpers in EVE history. For years, he has bumped freighters, jump freighters, and other enemies of highsec. Since bumpers typically don't get on killmails, it can be a thankless task--though sometimes the freighter can be persuaded, pre-gank, to compensate the bumper for his services.

One fine day in Madirmilire, Agent Siegfried encountered an Obelisk pilot by the name of Evey McEveFace. She was a confirmed bot-aspirant. Siegfried demanded that Evey eject from the Obelisk and allow the ship to be boarded. Evey refused--until a group of gankers applied some damage to the vessel. 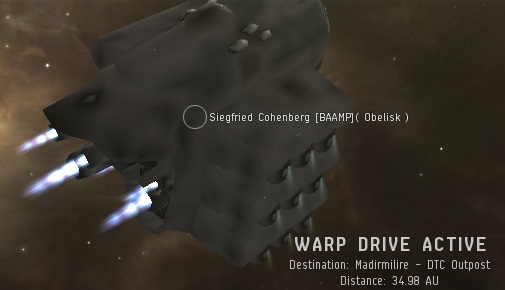 Fearing that a second wave of attackers would finish her off, Evey complied. Siegfried confiscated the freighter and searched it for contraband. 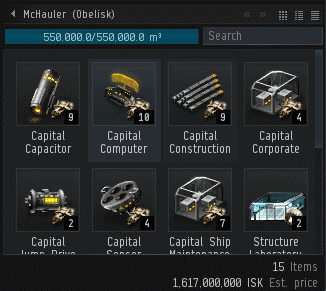 Evey's Obelisk was filled with 1.6 billion isk worth of cargo. None of it was licensed. Siegfried intended to make an example of Evey, but she begged him for mercy. She was desperate to get the freighter back. 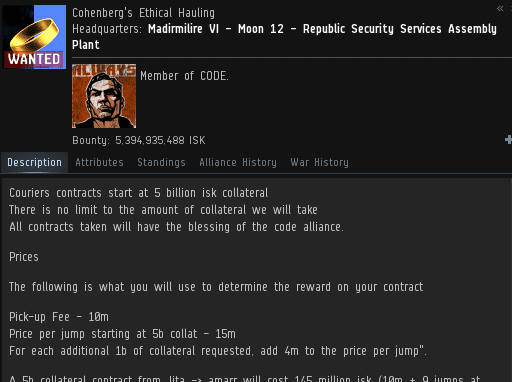 Fortune smiled upon Evey. It just so happened that Siegfried knew of a corporation where freighter pilots can be trained to engage in ethical, Code-compliant hauling practices. The corp, Cohenberg's Ethical Hauling, belonged to an alliance with a remarkable reputation.

Alas, some rebels have attempted to besmirch the name of Cohenberg's Ethical Hauling over the years. No doubt each and every one of these slanderers is in the pocket of the bot-aspirancy lobby.

Siegfried made Evey an offer: She could get her Obelisk and its cargo back, but only if she joined the corp and completed a special assignment for the mighty CODE. alliance. Her job was to deliver 100 Catalysts to Uedama. As a trial member of Cohenberg's Ethical Hauling, she would be required to use her own freighter (another Obelisk) and purchase the Catalysts herself. 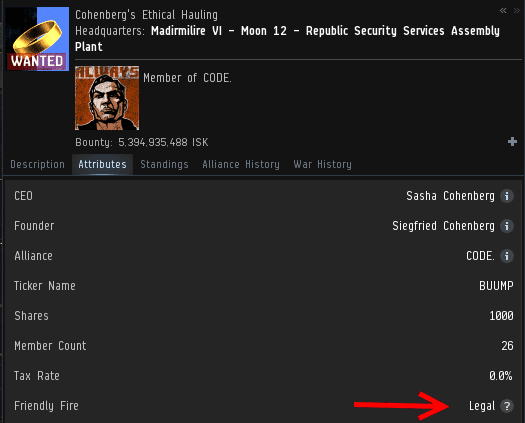 On the plus side, Evey would enjoy some benefits of being a member of the corp. For example, friendly fire was helpfully set to "legal" so corp members could web each other without CONCORD intervention. 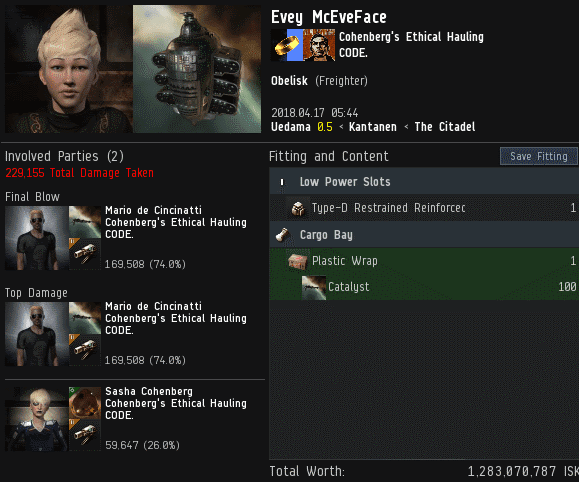 Evey eagerly accepted Siegfried's deal. Unfortunately, by the time she reached Uedama, she fell victim to temptation. She was unable to complete her assignment in a fully Code-compliant manner. Shocked by her behavior, Evey's corpmates had no choice but to awox her.

The combined loss of two freighters and their cargo put Evey 4 billion isk in the red. It was a rough first day for the new recruit. 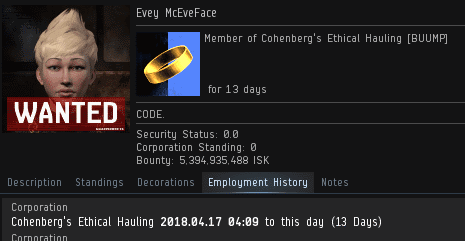 Interns for Cohenberg's Ethical Hauling might not get any isk, but they do get paid in experience. You can't put a price on that.
Posted by MinerBumping at 18:21