Previously, on MinerBumping... Agent Bob the Fourth saw potential in the Solitude region. The miners there were rough and unformed--malformed, really--but he could mold them into something that honoured the Code. And if not, he could kill them and take their blingy drones. 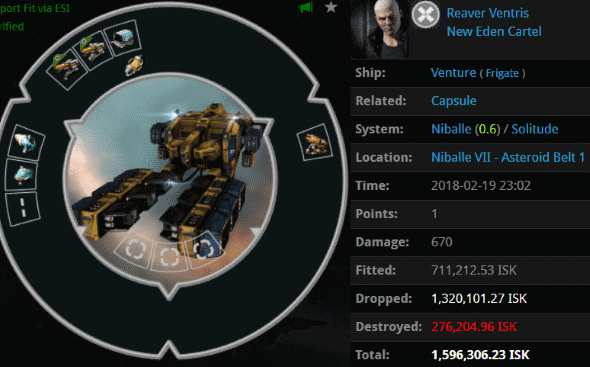 There's a perception among some that the New Order only cares about ganking big, juicy targets. And it's true that our Code enforcers appreciate big, juicy killmails. However, they kill every bot-aspirant in highsec, even Venture pilots. Big or small, the Code comes to them all.

Agent Bob ganked Reaver Ventris, who turned out to be what the rebels would call a "newbro". Unlike other "newbros", he wasn't some six-year veteran of the highsec asteroid belts.

Bob noticed that Reaver hadn't responded well to his post-gank killmail. Luckily, he happened to see Reaver again in the same system.

Though he'd been angry for a couple days after losing his Venture, the miner appeared to cheer up when he saw what a nice, charming person Bob was.

...But then, just as quickly, Reaver's mood turned sour again. Our Agent judged that this was one of those carebears who ran hot and cold.


Bob the Fourth > that's a very rebelious statement. I think you should go reread The Code and consider your choices.
Reaver Ventris > yes it was, i hope you enjoyed it theres much more to come
Vera Vala > I dont need a permit if you are here and I'm in another system. You cant see me soooo
Bob the Fourth > Vera Vala are you another miner that claims to be afk mining while sat in a station?
Vera Vala > I'm just mining somewhere else while you are sitting here, so no worries Im safe
Vera Vala > I'm safe nothing to worry about

Sometimes new MinerBumping readers are surprised to see how much attention our Agents give to individual carebears. It makes more sense when you realize that our Agents are experts at multitasking. They often carry on multiple conversations at once, all while bumping or ganking other targets. You might say that this strength of our Agents is a force multiplier.


Bob the Fourth > We the Agents of the New Order are working for the betterment of all High Sec. Why would you want to stand in the way of such progress?
Reaver Ventris > describe this betterment? what benefit is there to me?
Reaver Ventris > its just a code for the strong to prey on the weak
Bob the Fourth > i guess first off, you'll need to realize that it's not all about you.

As with so many other isk-grinders, Reaver had a selfish attitude. It was obvious that he hadn't yet embraced the highsec community spirit.

Barely a week into the game, Reaver was already prejudiced against Code enforcers.


Bob the Fourth > As a high sec miner, you occupy the space at the very bottom of the food chain. The sooner you accept that the happier you'll be.
Vera Vala > We know that you have been sent here to convince us to worship being more powerful than all of us. But you must know that like all of us, youre not gods.
Reaver Ventris > n who says ionly mine hisec?
Reaver Ventris > so stuff your foodchain

Bob was concerned for Reaver's future. The miner was too young to be playing into miner stereotypes. At this rate, he could end up becoming a bitter Anti-Ganker in a month or two.

Agent Bob was pleased to see that the miner's mind wasn't entirely gone. Corrupted, maybe, but perhaps all was not lost.

Just when things started looking up, the miner descended back into the darkest places of his soul. This mission was turning into a roller coaster ride.


Ali Mony > Not that I encourage Bob's piracy but it sdure can be good for business
Dalmont Delantee > Happy for Bob to pop whoever he wants, thats the game :)
Reaver Ventris > he can do what he likes, but he aint getting a penny from me
Reaver Ventris > especiallly nt after calling me scum
Bob the Fourth > When did i call you scum?
Reaver Ventris > bottom of the foodchain... scum.... its all in the code my friend

When you're new to EVE and you have no one to guide you, things can go bad in a hurry. The newbie miner had become radicalized. Was there any chance for Bob to save him?