Previously, on MinerBumping... Agent Xan Staraider ganked Munkin Keto's fail-fit Hulk. Xan followed up the kill by destroying someone else's blingy Covetor. For whatever reason, this second kill sent Munkin over the edge. Several of the local miners agreed with Munkin that miners shouldn't be killed for disobeying the Code. It was time for Xan to explain the facts of life. 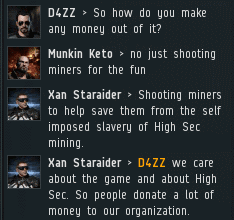 Years ago, CCP nerfed miner-ganking in order to make profiting from the activity much more difficult. D4ZZ couldn't imagine why anyone would bother ganking a miner without getting paid. 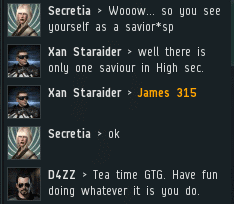 The mysteries of highsec are many. Whether they admitted it or not, everyone in the system looked to Xan for guidance. He was the only Agent present, after all. 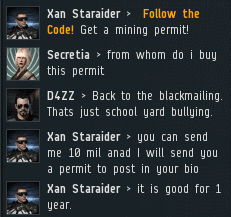 The miners were skeptical. They wanted answers, but they didn't like the ones they got. They had their own ideas about how highsec should be run--ideas that would kill EVE, if permitted to take root. 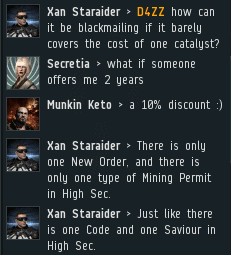 Sometimes you'll see a greedy carebear who wants a better deal than the Code. There isn't one. They comply or they die. 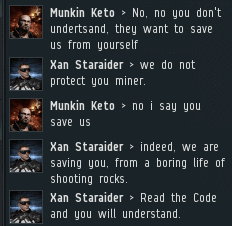 More than an hour had passed since Munkin lost his Hulk. He still felt very invested in the conversation. Maybe if he could prove Agent Xan wrong, something good would happen to him--like a fresh Hulk magically appearing in his hangar. 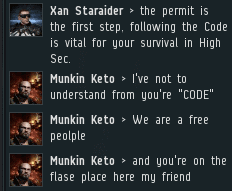 As a former Anti-Ganker himself, Xan quickly recognized Munkin's rebellious attitude as a problem. The miner was trying to foment an uprising. 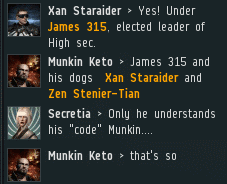 Like most would-be leaders of the resistance, Munkin was easily sidetracked. Moments after calling for the people to unite, he began to shout out the names of potential spies in his midst. 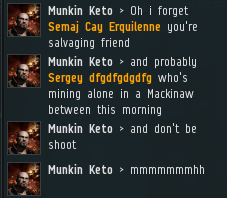 According to the increasingly paranoid rebel, suspicious activities included mining without being ganked.

Enough time ought to have passed for Munkin to accept his loss. Yet he was inconsolable. He had nothing better to do than sit in local and spit tacks. 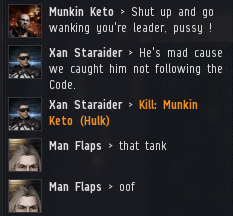 Thus far, most of the locals had been open to the idea of anti-Code resistance. So our Agent tried a different approach: He showed the people who Munkin really was. 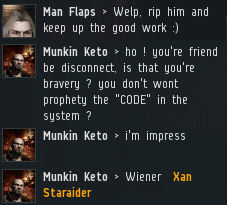 Man Flaps took one look at the Hulk fitting and decided that joining Munkin's army wasn't for him. 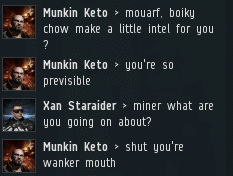 Having the Hulk loss thrown in his face proved to be the last straw. Munkin's mind, so unused to being exercised while playing EVE, was exhausted. His brain was a spent force. 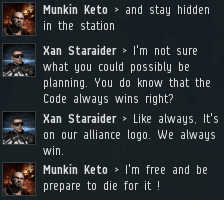 Despite Munkin's protests, there would be no grand uprising today. When faced with the truth of what these bot-aspirant miners do, the people of highsec cannot give them their loyalty. At best, they have only their pity to offer.
Posted by MinerBumping at 18:40