Previously, on MinerBumping... Barf Nader lost his composure when he witnessed his corpmate lose a freighter. For some reason, Agent Siegfried Cohenberg became the target of Barf's impotent wrath.

The carebear had absolutely no respect for the style of gameplay that made Siegfried famous.

And, naturally, Barf's hostility toward Siegfried was coupled with a hatred of the mighty CODE. alliance. The worst players in EVE all hate CODE. They're a coalition of Goofuses.

Under normal circumstances, this would be the part where Barf makes a vow to get his revenge by destroying the New Order. But Barf couldn't even muster the strength necessary to make a threat. He was beaten, and he knew it.

The carebear's only hope was that the New Order would generate enough karma to eventually attract a powerful enemy. Even if such a thing were possible, Barf miscalculated: All of our karma is good karma. 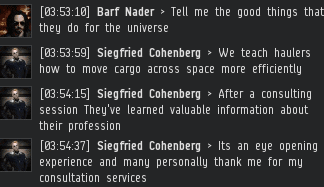 Somehow Barf never considered the possibility that the people who rage over dead Retrievers and make real-life death threats because someone shot their spaceship in a spaceship-shooting game aren't the good guys.

Sightseers lingered in Niarja to watch the spectacle. Seems like the "community" didn't mind what Siegfried was doing. Not one bit. 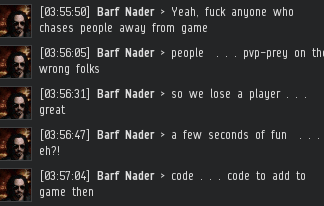 Barf was a classic case of a theme parker. He believed highsec should be completely risk-free in order to retain players. Barf sincerely believed EVE would be more exciting if we got rid of everything interesting in highsec--in exchange for some silent, AFK autopiloters. 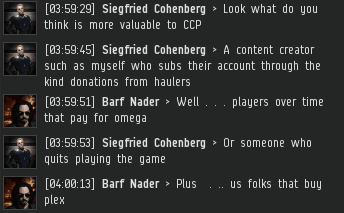 What Barf and his ilk fail to realize is that without content, everyone would unsubscribe--even if they had access to a few more space rocks. 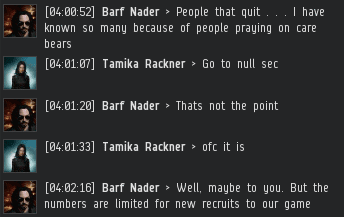 Barf was so disgusted by the Code that he almost couldn't stand to continue playing EVE. It made him sick to his stomach. Maybe that's what inspired his character name? 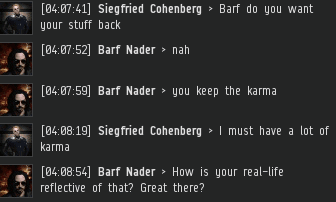 Eventually, Barf invited Siegfried to join him on voice comms to discuss the matter further. A relaxed Agent Siegfried exchanged pleasantries with his former "hauling consultant" customers, but at about the 1:20 mark Barf erupted, no longer able to contain his true feelings about Siegfried (and his family). SoundCloud: Barf Nader's Friend Loses a Freighter
Will Barf and company become repeat customers? That's open for speculation, but one thing's for certain: They need someone to teach them how to properly haul things.
Posted by MinerBumping at 18:08