Previously, on MinerBumping... Agent Bob the Fourth saw extraordinary success in selling permits, even when miners didn't intend to spend quite as much isk as they ended up doing. Nevertheless, even a licensed miner merits monitoring.

The shift toward miners using Orcas with named drones has had some unanticipated consequences. Unanticipated for the miners, that is. Our Agents are capable of stealing the drones and then making a nice bit of isk by selling them.

New Order Agents also receive something else in the bargain--intel. By recording the identities of miners who purchase the drones, our Agents can track them down and steal or destroy those very same drones. The cycle of justice continues.

Barabbas was lucky in one thing, at least: He'd been at his keyboard at the time. Otherwise, Bob would've bumped the Orca away and stolen the drones--and maybe sold them to Barabbas again.


Ryhos Gunerre > Bob its to bad. I docked up in my hulk. I think i am going to call it a day. Also the Ice Miners from Niballe let me know to avoid you whenmining
Bob the Fourth > Don't worry, I know all about your Hulk.
Ryhos Gunerre > ;)
Ryhos Gunerre > Good because i'm heading out

Bob's reputation for power and excellence spread further. This had a funny side effect.

Barabbas had some interest in doing things other than mining. EVE has a steep learning curve, so the miner sought advice from someone good at EVE. Who better than an Agent of the New Order?

In fact, this is a common phenomenon. The "victims" of Code enforcement often seek out Agents for help. We're the only ones who truly care about the fate of highsec carebears, after all.

And, I mean, it's not like you can get useful advice from a member of Anti-Ganking.

Over time, Barabbas found himself wondering why so many people hate the mighty CODE. alliance. I've written an 11-part series on the subject, but the short version is that people who hate CODE. are bad and dumb. Initially, Barabbas took it for granted that CODE. should be hated, but when he cracked open his mind a little, truth started to seep in.

One day, Bob found an extra 10 million isk in his wallet. Had the day finally arrived?

The miner saw the wisdom in giving Bob money, but was not quite ready to purchase a permit. 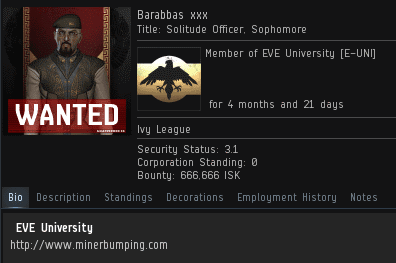 Still, he was getting there. Slowly, but surely. Even so, we mustn't sugarcoat anything less than total compliance. As this kill from someone else's wardec demonstrates, only 100% Code-compliance is worthy of highsec.