Fun fact: Each Agent of the New Order has the heart of a lion. Welcome to another edition of the Highsec Miner Grab Bag!

Killaforilla Gnomie seems to be trying explain his crimes, but I didn't get very far beyond the "dog meds" line...

This is running dangerously close to "my dog ate my permit".

And it ends with a "Praise James". That's fine. Praising me is good. Even better is to obey each and every provision of the Code, and praise me. 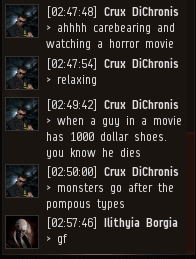 I believe this is what's known as dramatic irony. Our Agent ganked the miner, who soon realized he was living in his own horror movie.

Sara Malius spoke like a cheap thug, but Agent Super Perforator sensed that she had more to offer...

Sara's next response was better, but there was still a little something left untapped...

...There we go. For the record, the New Order has always been opposed to DDoS attacks. (Yet the carebears blame us every time. Maybe because we're the only powerful organization in EVE that they're familiar with?) 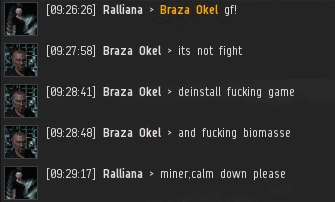 Apparently Braza Okel missed a memo or two: It's the loser who biomasses after a fight. Not to worry, there's a perfectly reasonable explanation for this. Someone handed me 50 mill and told me to wardec you.

I haven't asked Agent holdmybeer for a field report, but I'm confident that he would never lie about a botovodstvo. Our Agents take botovodstvos very seriously.

When in doubt, send me isk. Nobody ever quit EVE wishing they gave me less money.
Posted by MinerBumping at 18:33