If you're looking for good, quality, emergent content in EVE, there's only one place you're guaranteed to find it. 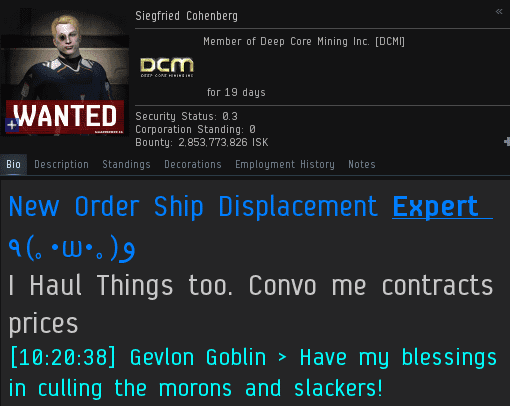 The New Order is a font of content. Agents Siegfried Cohenberg and Tamika Rackner were in the Niarja system to promote their "hauling consultant" business. It didn't take long for them to get a customer.

Agent Siegfried is a solutions-oriented kind of guy. He wasn't really interested in arguing about what went wrong and whose fault it was. All he wanted was to help Barf Nader's corpmate get his freighter safely through Niarja. Because it would take the Talos a few minutes to destroy the ship, this was still a possibility--as long as the freighter pilot didn't stiff Siegfried on the hauling consultant bill.

Even as his friend's freighter was being drenched in antimatter, Barf made it his mission to antagonize the only guys capable of saving the ship.

Barf made some strange and illogical accusations against Siegfried--as if being good at EVE makes someone a bad person. 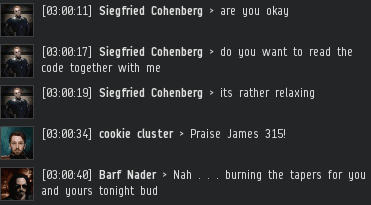 The scene in Niarja local began to draw a crowd. Public opinion seemed to favor our Agents. Important choke-point systems in highsec like Niarja and Uedama tend to be pro-Code areas.

To facilitate the rescue of the freighter, Siegfried suggested that the two men engage in expedited diplomacy by means of voice communication. Our Agent generously offered his own TeamSpeak channel as a venue. But time was running out. 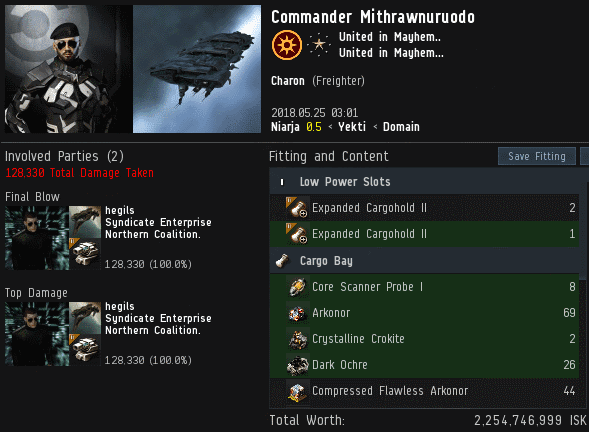 Alas, the freighter was destroyed.

Though it was too late to save the Charon, Siegfried hoped that some good could still come of the encounter. 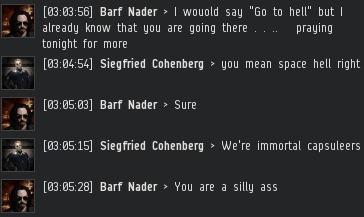 Though there was no risk of a "Bonus Room" incident occurring on Siegfried's watch, Barf had absolutely no interest in joining the TeamSpeak channel.

Suddenly, Siegfried came up with an entirely unexpected proposal. Was it possible that Barf would invite Siegfried to join his alliance as an in-house hauling consultant?