Previously, on MinerBumping... Foghat Allier moved to the Chelien system and tried to put his sorry past behind him. Despite making a home in a new system, Foghat was unable to stop losing Orcas. Things got even worse for Foghat when he voluntarily engaged in a 1v1 against a member of Drone Task Force--and lost another Orca.

Foghat's latest Orca loss was a teachable moment, but the miner wasn't in a learning mood. He was steaming.

Agent Alleil Pollard explained the situation. What Foghat needed was a mining permit. Maybe then he could keep a ship intact for a while.

The rebellious Foghat asked some pointed questions about the nature of highsec's legitimate government and its Saviour. Alleil easily answered them all. Foghat became less ignorant but no less frustrated.

Foghat feared that if he remained online any longer, he might say something in Chelien local that would damage his reputation. He bid the system adieu and politely rage-quit for the evening.

Though it seemed unlikely that Foghat would come to his senses, Agent Alleil gave him the benefit of the doubt and sent him an EVEmail requesting some money.

You think those confiscation notices are a waste of time? Look who came crawling into the NOL_Public channel.

Away from the prying eyes of his Chelien system peers, Foghat dispensed with the attitude and meekly handed over his isk.

In the end, all the miners pay--even the rebellious ones. No one wants the New Order as their enemy. Our Agents are simply too powerful. 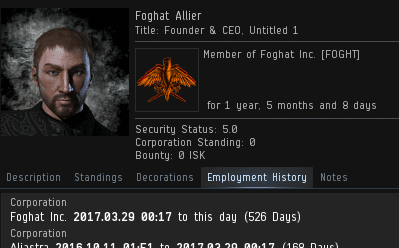 Nevertheless, a Goofus minus 10 million isk (or 60 million, in this case) is still a Goofus. One must embrace the Code, not merely spend some money.

Agent Alleil noticed that Foghat didn't put his mining permit in his bio. If someone looked at Foghat's profile later, they'd have no evidence of Foghat's fealty to the Code. Was it a careless oversight?

Alas, it appeared that Foghat was not yet ready to become a better EVE player. Any Orca he buys in the future is at serious risk.
Posted by MinerBumping at 18:15