Back in the USSR, Part 2

Previously, on MinerBumping... Michael Sviridovich wasn't happy about losing a Venture, but he was even more upset by Agent Katy Melons' explanation of the Code, which triggered painful memories of post-Communist Russia in the 1990s. Hoping to avoid the experiences of his past, Michael tried to weasel his way out of buying a permit.

On occasion, miners send me their tears by adding me as a contact. Each such unsolicited notification, I know, has its own story--which I read about when the Agent on duty EVEmails me a report.

Michael was disgusted when Agent Katy told him that EVE is meant to be a PvP game. He demanded proof. If he got it, he would quit the game forever.

Katy had no interest in making Michael quit the game, but as an Agent of the New Order and a member of the mighty CODE. alliance, she was very interested in the truth. Michael didn't like it. 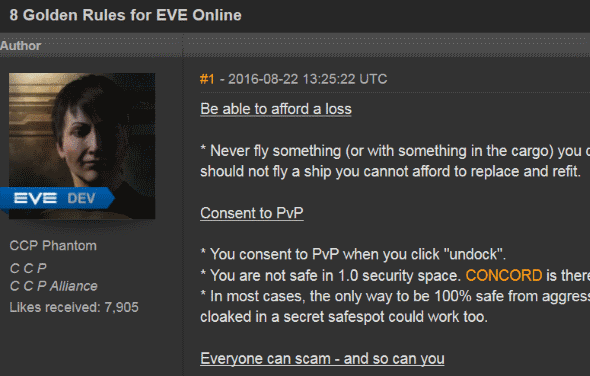 Michael actually went to the trouble of reading CCP Phantom's post (or at least skimming it). But the miner struggled to accept what he read.

Based on Michael's EVEmails, it became clear to Katy that the miner wasn't interested in dealing with other people--only rocks. In that case, there was little reason for Michael to play an online game. The miner couldn't argue with Katy's logic, so he again invoked Russia's troubles.

Michael refused to admit that he wanted to play a solo game. He was perfectly happy to share highsec with other players, as long as they didn't do something annoying like create a civilization. 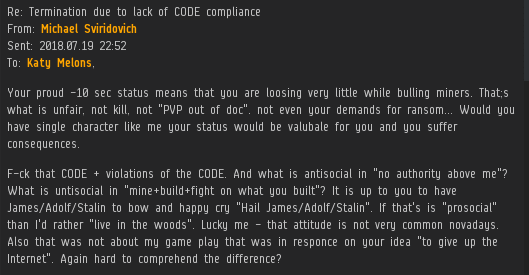 Like other Goofuses, Michael was biased against those with negative security status. Theme parkers often demand that CCP increase the penalties for being a -10. Apparently, not being able to sit in space for more than a few seconds without guaranteed death is "losing very little". 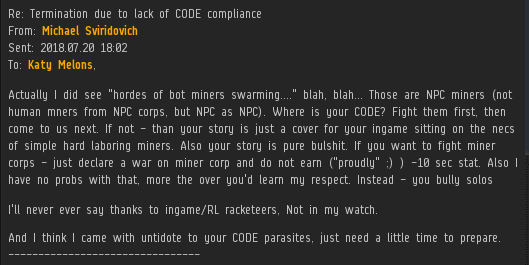 At last, the miner decided it was time to fight back. And he already had an idea of how to defeat CODE. once and for all.

Agent Katy informed the miner that resistance is futile. Many have attempted to beat the New Order, and all have failed. We are invincible. The CODE always wins. Always!

Michael remained confident in his secret plan. He offered Agent Katy a challenge--for the fate of all highsec. The stakes couldn't be higher. What did Michael have up his sleeve? 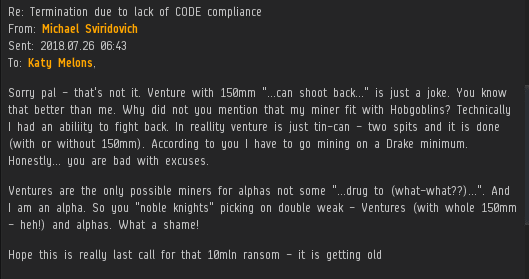 As the miner prepared to put his plan into action, he whined about Ventures and their lack of tank. Ventures are the only ships that Alphas can fly, you know.

After a few more parting shots, Michael abruptly stopped communicating with Katy. Was he ready to bring about the demise of CODE.?

Michael hasn't been seen since Katy ganked his Venture in July. The Code still reigns supreme in highsec. Perhaps Michael didn't have a plan to defeat us after all. Then again, he said he would need a little time to prepare, so who knows?
Posted by MinerBumping at 18:18