Previously, on MinerBumping... The war was taking its toll on Lahnius. He'd dreamed of fighting a righteous crusade against Agent Alt 00 and the rest of the mighty CODE. alliance, only to be embroiled in a war with Failed Diplomacy corp. Then the worst happened: Failed Diplomacy destroyed Lahnius' precious refinery. But Lahnius wasn't out of the game yet.

Lahnius had a fantasy about getting CODE. members banned by reporting a conspiracy theory to CCP. Naturally, Lahnius shared this fantasy with Nakugard local. 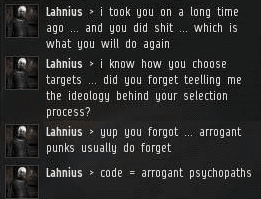 Late at night, Nakugard was quiet. Lahnius noticed that Alt 00 was still in the system, though, so he challenged her to argue with him. 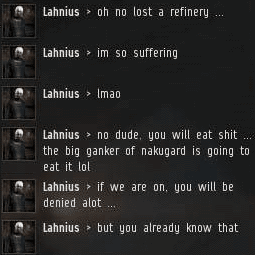 Our Agent was AFK. Unlike the miners she hunted, however, she was safely docked up in accordance with the Code and common sense. Her account merely logged chat. Lahnius kept chatting. 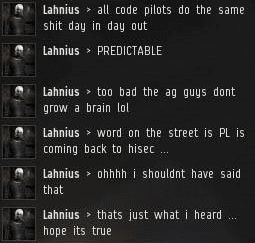 Without anyone to talk to, Lahnius mused about highsec politics. Maybe Anti-Ganking would wise up and figure out a way to defeat the New Order, or maybe Pandemic Legion would do it. 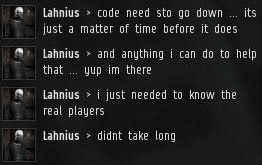 Lahnius felt he was in a stronger strategic position than when the Failed Diplomacy wardec started. They destroyed his refinery, true, but he'd gathered so much intel in the meantime. 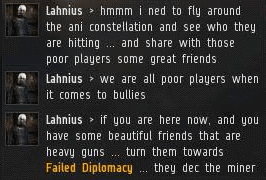 What Lahnius needed was a way to translate his intel into victories in actual spaceship battles. That goal, so far, proved elusive. Maybe random people who saw him chatting in local would provide the necessary firepower. 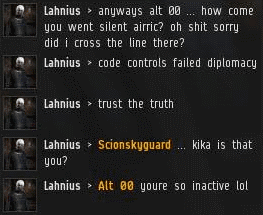 Lahnius gradually realized that he was alone, broadcasting his message into the cold, dark emptiness of space. 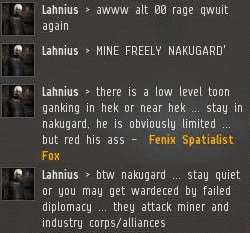 Alt 00 eventually logged off for the night, though another account remained in system to log chat in her absence. Would Lahnius find a reason to continue talking? 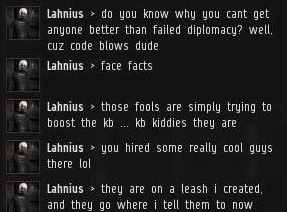 Lahnius boasted to anyone who would listen, which was pretty much no one. Whatever plans Lahnius had with his "lady", they were put on hold for this nonsense. 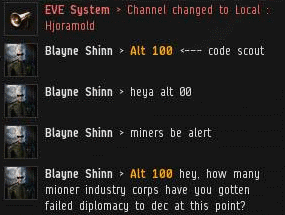 The next day, our Agent was scouting nearby systems when he ran into Blayne Shinn. From his previous encounters with Blayne, Alt 00 knew him to be an alt of Lahnius. 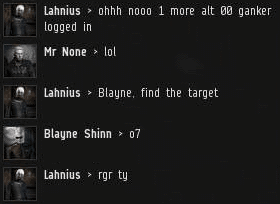 Another of Lahnius' alts, Mr None, joined the conversation. It seems Lahnius had found a solution to his problem of having no one to talk to: He spoke to his own alts, giving them commands--which they of course promptly obeyed. They even laughed at his jokes. 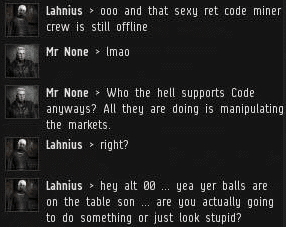 Unlike other EVE players, who called Lahnius a crackpot, Lahnius' alts completely agreed with his conspiracy theories. 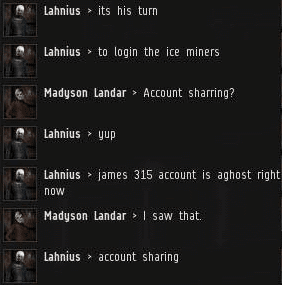 Lahnius enlisted the support of yet another of his alts, Madyson Landar. She was able to confirm Lahnius' suspicions about the Saviour of Highsec. At last, the rebel leader had found his following.