In-game fate. In-game fate! Let's get going on another edition of the Grab Bag.

Is there any merit to the miners' complaints about us? No. And the better ones can see that, if only they can calm down for a minute.

Obey the Code or lose your ship. I think that's reasonable, don't you? 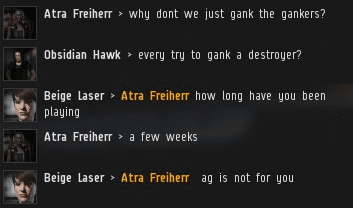 Anti-Ganking isn't for everyone, you know...

No wonder the Anti-Gankers are having trouble finding recruits these days. Maybe they can sign up some former members of Pandemic Legion?

When Beige Laser's "expert" game mechanics don't work, some carebears turn to the occult. Needless to say, this is not tolerated in New Order territory. The good citizens of highsec are supposed to rely on the Code, not sorcery. That's why our Agents always gank a witch whenever they see one.

Miners aren't known for being good at adapting. 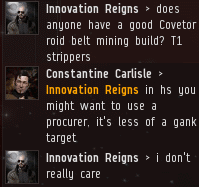 Another Help channel fail. The best way to educate a miner is to gank him.

Either the blingy drone users' losses haven't really been replaced, or they're running some kind of highsec Rorqual syndicate.

"Murder capital of the world"? Psssh. This is Code-era highsec. Welcome to the endgame. 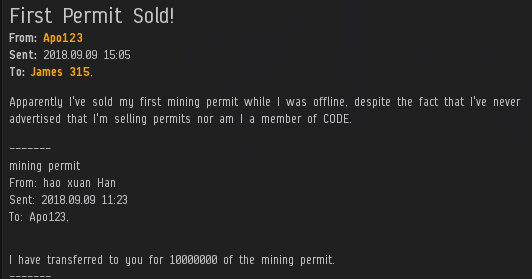 These days, the miners run around frantically, looking for someone to surrender to. One of the many benefits of being a Code enforcer is that random people will throw money at you. I'm pretty sure that means we're winning.
Posted by MinerBumping at 18:11