Over One Trillion Six Hundred Nine Billion in Shares Sold

EVE players owe a lot to the mighty CODE. alliance. I mean, a lot. There probably wouldn't even be an EVE today if it weren't for us. And people know it.

It was the most natural thing in the world for Lothar Mandrake to purchase 1,000 shares of New Order stock. The purchase took us past the 1,609 billion isk mark, earned Lothar a Supreme Protector's Tip of the Hat™, and it just made sense for him to do it.

Nobody teaches people how to play EVE more than we do. Well done, Agents.

Agent CiXiang Reytzenstein recognized that the enforcement of the Code is the best thing that's ever happened to the miners of highsec. An obvious point, perhaps, but CiXiang knew that a lot of miners miss the obvious. So she made some artwork. 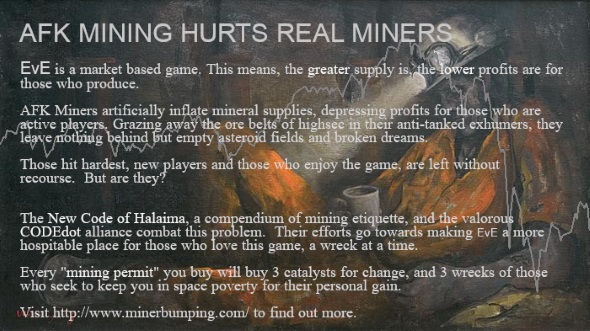 Click for full-size version
In a parallel universe where there was never a Code--assuming EVE still existed in 2018--heck, assuming the parallel universe itself still existed in 2018--the miners would be absolutely miserable. To the extent that they're not miserable today, it's because of the Code. Another well-earned round of applause to our Agents. Amazing job.
Posted by MinerBumping at 18:06