If You Ignore Them, They'll Go Away

If you're going to come up with an excuse for not buying a mining permit, "I only have 10 million isk" is a really bad one. 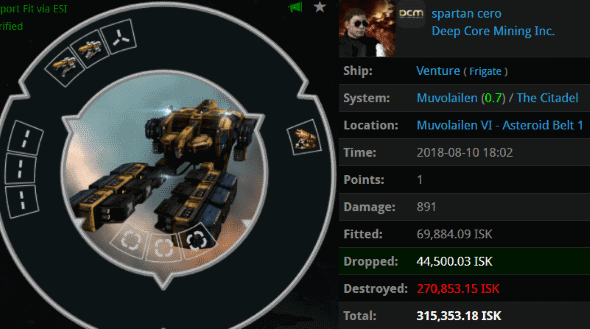 spartan cero lost his Venture. Despite having plenty of money for a permit, he chose not to purchase one from Agent Lewak. Instead, the miner decided to buy a new Venture and augment its defenses. 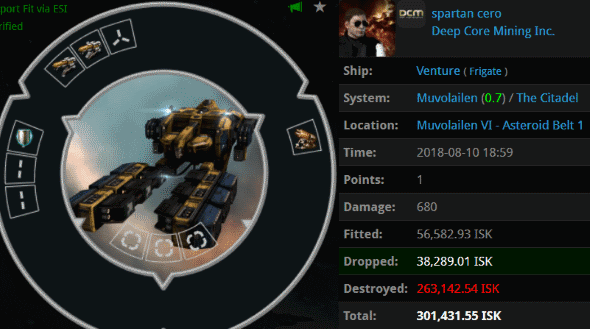 Some miners complain that they weren't warned about the Code before being ganked. It's an unpersuasive excuse, especially after they get ganked the second time.

Every Agent loves an opportunity to name-drop the Saviour of Highsec. Without realizing it, spartan cero created one.

The miner's ignorance suggested that he was a new player. Actually, he'd been playing EVE for several months before he was ganked. In that time, the only thing he'd learned about the game was misinformation.

Agent Lewak defeated spartan cero in spaceship PvP and verbal PvP. Now the miner wanted a rematch--in verbal PvP, at least. He attempted to craft some sort of rhetorical trap.

...But whatever line of questioning spartan was attempting to set up, he dropped it. My name triggered him, I think.

The Code is the only thing happening in highsec, the most populated area of EVE. As it always does, it attracted attention. Content!

The nine-month EVE veteran believed that a poorly fit Venture was his only path to success. Lewak knew better: The only thing spartan needed in order to prosper in the game was the Code. And Lewak had already given it to him, twice.

"The mighty CODE. alliance only wants attention. If everyone ignores them, they'll get bored and go away." Such was the thinking of the bot-aspirant carebears... in 2012. It's hard to be more wrong than that. In fact, CODE. is one of the few organizations in EVE from 2012 that still exists today, and we grow more powerful and more relevant every day.

The miner logged off in a huff, leaving our Agent to sum up the day's events for everyone watching in local chat:

No one can, in good faith, seriously recommend to another player that they should attempt to resist the Code. It doesn't work. It never has and it never will. The only proven path to prosperity is compliance.

Always!
Posted by MinerBumping at 18:15