Previously, on MinerBumping... Agent Ernst Steinitz confiscated billions of isk worth of blingy drones from illegal miner Mick O'niel. When he realized that his reimbursement claim was likely to fail, the guilty miner attempted to put the Code itself on trial.

Mick had hoped that mining in a "rookie system" would protect him, despite the fact that his character had been created in 2013.


Mick O'niel > i will steal all i can from those whom assert that all is theres its a logical truth
Lewak > we are increasing player retention not driving them away, ccp proved that
Mick O'niel > show me ur evidance?
Lewak > http://www.minerbumping.com/2015/03/ccp-proves-new-order-was-right-about.html

Carebears, never ask an Agent of the New Order for evidence unless you actually want to see it. Our Agents are always armed with evidence.

Assuming popular opinion was on his side, Mick took his case to the public. He discovered, to his horror, that highsec is filled with pro-Code sentiment these days.

With all rhetorical options fully exhausted, Mick put his back-up plan into action. 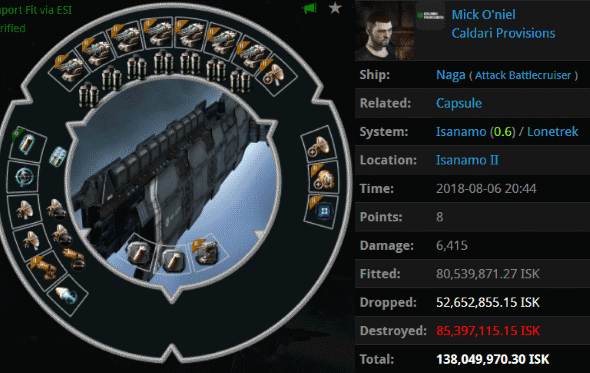 ...And promptly lost his battlecruiser.

The miner was chastened, but not yet out of excuses.

Mick was stunned by our Agents' elite PvP skills. This is a common reaction among miners who spend all day shooting at asteroids that can't shoot back.


Mick O'niel > so if i give y 10m ull leave me to my belt then yeah ?
Ernst Steinitz > for 10M ISK you can purchase a Mining Permit that is valid for a whole year of Mining in HighSec.
Mick O'niel > i dont trust you ....
Mick O'niel > how can i
Mick O'niel > ull likly come and gank me for a laugh
Mick O'niel > whats to say another code doche wont drop in and do me as im not on his spread shet lol

Mick understood that a New Order mining permit was his only option. Still, he couldn't bring himself to open his wallet.

Being told he couldn't use blingy mining drones was a deal-breaker for Mick. He logged off in sorrow.

A few days later, our heroes returned to Akiainavas, the "career agent system" that Mick felt belonged to rookies. This time, he was alert and at his keyboard.

Mick played the Anti-Ganker for a moment, attempting to warn his fellow miners. It was in vain, of course: An AFK miner was destroyed. Once again, Mick was astonished by our Agents' efficiency.

The power of the Code is an awesome thing to behold. Even to the most hardheaded of bot-aspirants.
Posted by MinerBumping at 18:10