Another edition of the Grab Bag, another death threat... 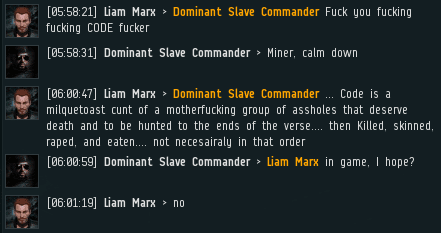 I can't believe he called us milquetoasts.

If these people are so new and innocent, how do they already know to spout all the anti-Code talking points?

Sounds like a veteran Anti-Ganker if you ask me.

Our Agents have noticed a disturbing trend of miners who, instead of using a hauling alt, leave an empty hauling vessel next to their mining ship. Luckily, our Agents can simply board the hauling ship--such as the Orca seen above--and confiscate it.

Maver11ck Charante also lost his hauling ship this way. Our Agent agreed to meet him at the system's star, but Maver11ck was a no-show. Miners hate shooting ships that can shoot back. 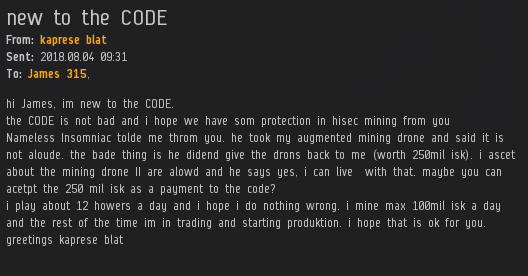 Oh, and don't forget that our Agents confiscate drones, too!

Protip: Ask for an Agent's permission before you start doing something.

My "crew" is the best thing that ever happened to EVE Twitch streams. I doubt many Twitch viewers would want to watch a bunch of highsec carebears not getting what they deserve. 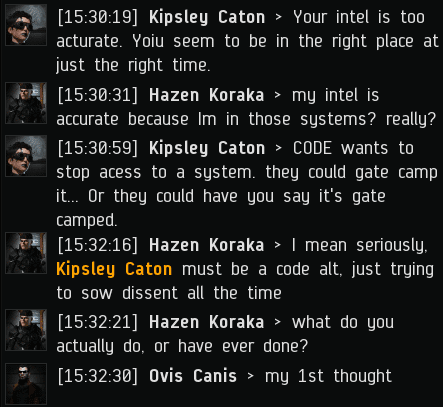 I'm not saying Anti-Gankers are paranoid, but they do spend a lot of time accusing each other of being spies. In fairness, though, that's not all they do: 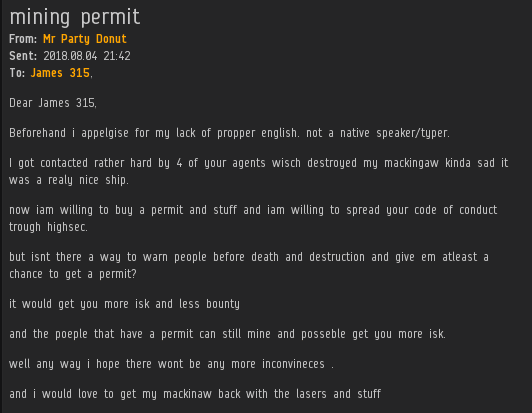 "Contacted rather hard." That's not bad for improper English. Maybe the next time some carebear whines about not being warned before being ganked, we can say he was simply given a "hard contact"?

If you simply must rebel against the Code, this is the way to do it. Gank someone's Charon and tell us about it.
Posted by MinerBumping at 18:15