Previously, on MinerBumping... Lahnius showed his true face to Agent Alt 00. Though Lahnius had pretended to be a sycophant in desperate need of attention, he was actually on a secret mission to destroy the mighty CODE. alliance--while loathing the entire experience. However, Lahnius' chilling confession didn't discourage Failed Diplomacy from prosecuting its wardec against Lahnius. They remained convinced that Lahnius was pro-Code. 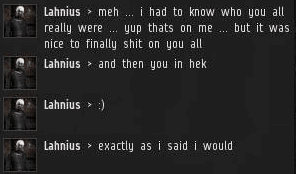 The months-long undercover operation finally paid off, though. The Battle of Hek was won! 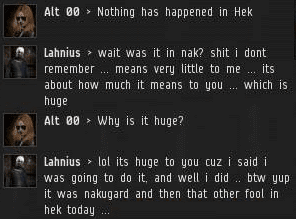 ...Or maybe the Battle of Hek never happened. Ya know, whatever. 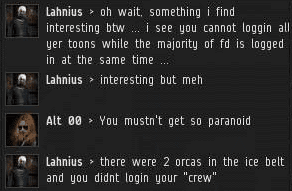 For now, the primary threat to Lahnius' future was the wardec from Failed Diplomacy. He studied them closely. Was it possible that they were all alts of Alt 00? 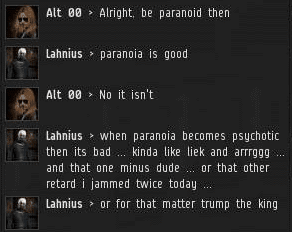 Though Lahnius had moved on from his time in CODE., he couldn't forget all the enemies he'd made. Congrats to the Agents he named here. 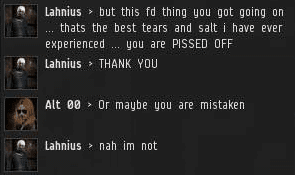 Lahnius once again changed his theory about the origin of the Failed Diplomacy wardec. Clearly, Alt 00 had hired them as an expression of her hysterical rage. 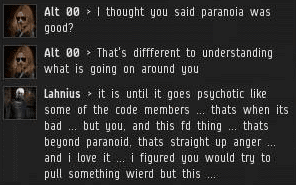 Actually, Alt 00 and CODE. didn't orchestrate Failed Diplomacy's wardec; it was a happy coincidence. But for Lahnius, the wardec was proof of Alt 00's bitterness against him. In a way, he'd won already. 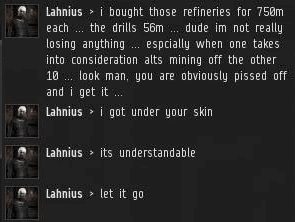 In the midst of his latest multi-hour rant about CODE., Lahnius encouraged Alt 00 not to hold a grudge. 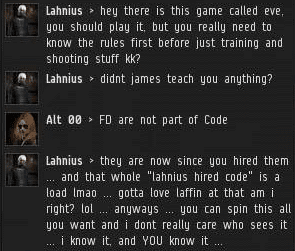 Lahnius now attempted to convince Alt 00 that she'd been defeated. It appeared to be another example of arrogance on Lahnius' part, but in fact there was a hidden motive behind it. 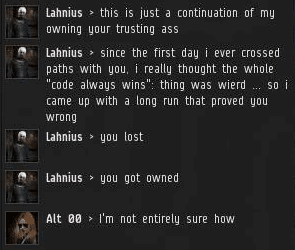 Lahnius needed Alt 00 to believe she'd lost--it was the only way he could negotiate from a position of strength: 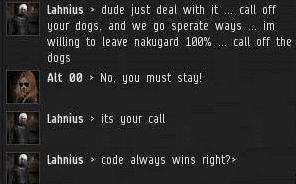 The Anti-Ganker hoped that he could get Alt 00 to cancel the wardec. In exchange, he would surrender his powerful influence over the Nakugard system. Our Agent decided to decline the offer. She couldn't cancel the wardec because she hadn't ordered it in the first place. 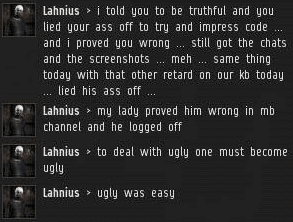 Diplomacy failed; the war with Failed Diplomacy would go forward. The prospect rattled Lahnius. He began making a bunch of vague references, all of them apparently intended to make him (and his lady?) look good. 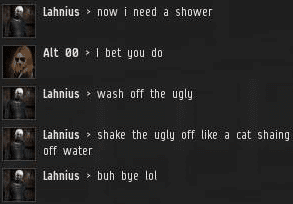 Lahnius prepared to sign off. At last he would be reunited with his wife/lady and enjoy what was left of the evening. 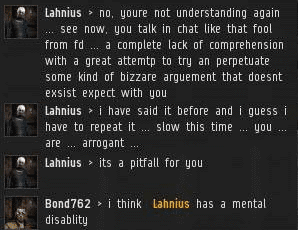 ...Or maybe his rants in Nakugard local would continue.