Konker Sauras > i didn't htink a 1 million dollar bounty would attract much
Konker Sauras > how much did that hsip cost you?
Slutzilla > that ship cost me nothing. my friend gave it to me.
Slutzilla > he's gonna give me another one later.
Ralliana > see? thats what real friends do..

Our Agents are the only people who tell the truth when they say their loss has already been replaced. That's the power of the Code. And if you think it's unfair, carebear, then ask CCP to make CONCORD into a chance-based mechanic instead of a guaranteed death.

Konker lamented his ill fortune. With the loss of his precious cruiser, he was flat broke.

It seems Konker has been running into a lot of bad luck lately. Actually, "a screen got stuck" sounds like an AFK miner's euphemism for "my ship was missing its pilot at the time".

Agent Slutzilla casually asked the miner a few questions. Once again, Konker did not appear to be suspicious of the person who had just ganked him.

The miner had a lot to learn. Slutzilla was able to anticipate his every move--as we will see, dear reader.

Konker claimed to be ignorant of the rules of highsec. Very well. Our Agent was prepared for this.

People die for plenty of reasons in EVE. If you've died in highsec, chances are that you were killed for disobeying the Code. Highsec is the most rational part of the galaxy.

For someone who acted like he didn't know what the Code was, Konker was pretty quick to deny ever having violated it. But this is where our Agent's expertise gave her an advantage:

Konker had no idea that he'd been engaged in verbal PvP with Slutzilla all along. Before the miner even thought to protest his innocence, Slutzilla had already won.

Konker knew he was playing from behind, so he scrambled to come up with some excuses.

A protip for all you carebears out there: If you're going to enter an abandoned mining site, you had better bring proof of your lack of intent to mine there in the future. (Also, you need a permit to kill highsec NPCs.) 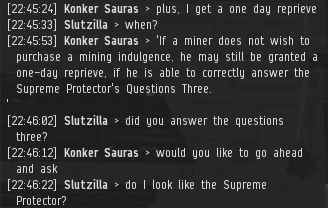 Next, the miner tried to find a loophole in the Code. Good luck with that one! Many space lawyers have tried, but all have failed. 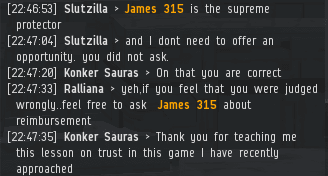 Konker scurried behind his newbie status and prepared to send a reimbursement request to the Saviour of Highsec. 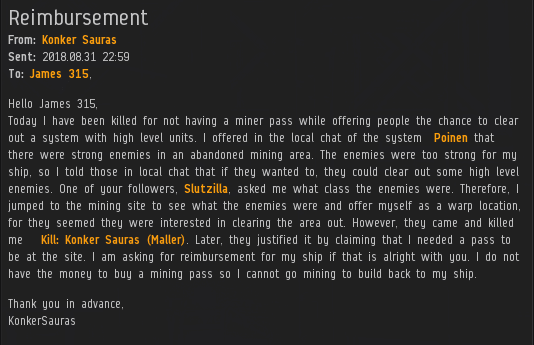 Alas, Konker found himself tangled in a web of lies. His claim about "recently approaching" EVE was a lie, as he joined the game two years ago. He also lied about not having the funds to purchase a mining permit, since in Part 1 he admitted to having 18 million isk. Under the circumstances, I have no choice but to deny his reimbursement request and put him on the Red Pen list for making false statements to an officer of the Code. Case closed.

I prefer mining sites to be abandoned anyway.
Posted by MinerBumping at 18:18