Previously, on MinerBumping... Agent Alt 00 was spared the wrath of Lahnius when the Anti-Ganker's plans to destroy our Agent were interrupted by a wardec from Failed Diplomacy corporation. Lahnius tried to prove to Failed Diplomacy that he wasn't a New Order spy. Finally, he came up with the idea of exposing the secrets he'd learned while a member of the mighty CODE. alliance.

For months, it seemed as though Lahnius was a lonely suck-up, always trying to get Alt 00's attention. Now he revealed that it was just a clever ruse the whole time. 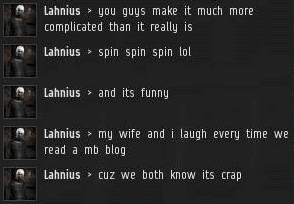 Lahnius knew that people would be skeptical of his claims, but so what? He and his wife knew the truth, and that was all that mattered. 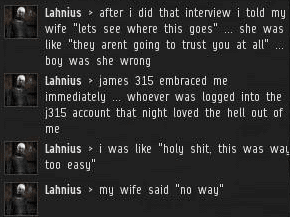 For the first time, Lahnius revealed that he'd greatly impressed the Saviour of Highsec in a previously undisclosed meeting. We know the meeting happened because his wife was a witness to it. 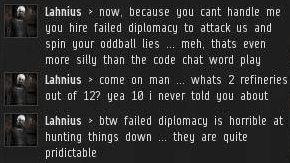 Lahnius unloaded more secrets in Nakugard local chat: Though Lahnius had admittedly been foolish to tell Alt 00 the locations of his two refineries, there were ten more that nobody knew about. And their locations would never be discovered--they were too well hidden. 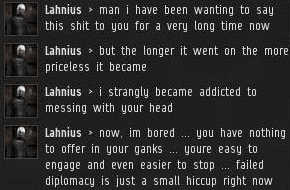 The Anti-Ganker felt liberated now that he no longer had to pretend to be an idiot. Once the pesky war with Failed Diplomacy was taken care of, he'd put a plan into motion that would destroy the New Order once and for all.

Of course, CODE. had a temporary reprieve, because Lahnius' priority was protecting his two non-hidden refineries. He didn't want to see them destroyed, even though he had plenty more. 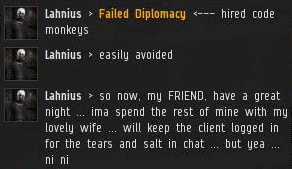 Satisfied that he'd answered all questions, Lahnius concluded his speech to Nakugard local and prepared to go AFK. 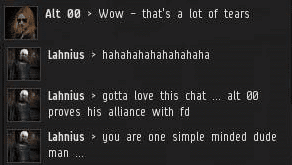 ...Then again, maybe Lahnius' wife would have to wait while he defended himself from criticism in chat. He had an image to protect. 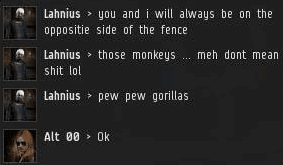 Members of Failed Diplomacy had wardecced Lahnius on the mistaken assumption that he was working for CODE. Having witnessed his anti-Code speech, they were unsure of what to think--except that Lahnius was nuts. 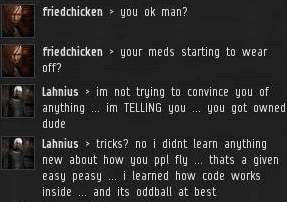 Lahnius hoped that his speeches would prove his anti-Code credentials, and that Failed Diplomacy would retract the wardec. Judging by friedchicken's reaction, Lahnius didn't do himself any favors. 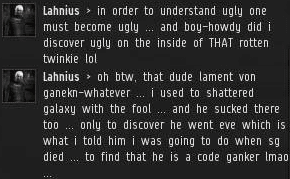 Earlier, Lahnius had accused Agent Trump The King of having been someone he met while playing a game called "Shattered Galaxy". Out of nowhere, Lahnius resurrected the claim and reassigned it to Agent Lament von Gankenheim.

Unfortunately, Lahnius could barely get a word in edgewise. That motor-mouth Alt 00 wouldn't shut up about herself! 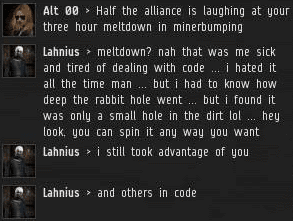 Lahnius bristled when Alt 00 brought up the now-infamous blow-up he'd had with Trump The King. Once again, Lahnius' reputation was under attack in Nakugard local chat. The Anti-Ganker couldn't log off without answering the challenge.