A Claim for Reimbursement 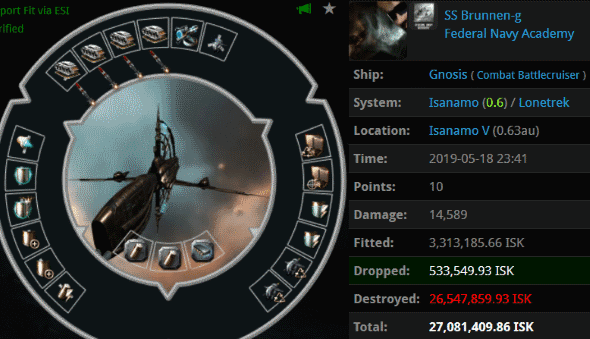 Nice to meet you, SS Brunnen-g.

SS Brunnen-g was stunned when he lost his prized Gnosis. But he was even more upset by the fact that the rulers of highsec felt he had violated the law.

When Agent Shadow Cyrilus didn't immediately respond, SS Brunnen-g went into a panic and started sending out EVEmails to anyone in local who had a connection with the New Order.

At last, an Agent followed up. The carebear could breathe a sigh of relief.

SS Brunnen-g insisted that he was innocent of all charges. He promised to be a respectful citizen of highsec--if he got all of his stuff reimbursed, that is.

SS Brunnen-g was gratified to hear that the matter was being processed. At least his claim was in the system now. 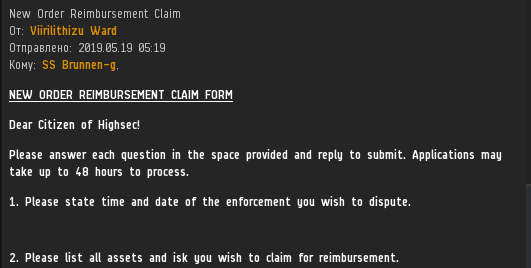 Agent Viirilithizu Ward sent the carebear a form with several questions. Time for SS Brunnen-g to do some homework. 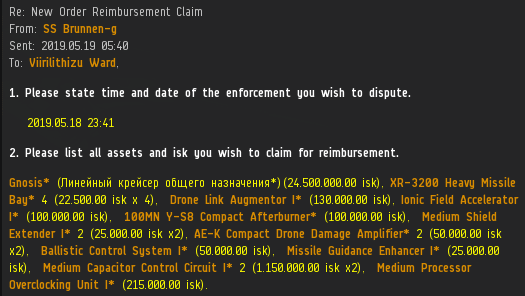 The carebear spent the next 20 minutes filling out paperwork. It wasn't fun, but neither was EVE's PvE. And if he did get reimbursed, his isk/hour would be better.

Gankers don't go around reimbursing everyone they kill; that would be pointless. The New Order Reimbursement Claim Form was designed to filter out unworthy claims from Code-violating carebears. SS Brunnen-g spotted a potential trap in the question about being AFK. He cleverly answered "no" so as to avoid incriminating himself on the record.

One by one, the carebear filled in a response to each of the questions. He grew more confident that he would pass the test.

Alas, a bot-aspirant's true colors always come out in the end. SS Brunnen-g admitted that he had failed to purchase a mining permit. His reimbursement claim would be denied after all. SS Brunnen-g was right about one thing, though: It was foolishness--foolishness for him to think he could get away with disobeying the Code!
Posted by MinerBumping at 18:01