When They Hear the Name

Pop quiz, hotshots: How can you tell if a miner is a Goofus? 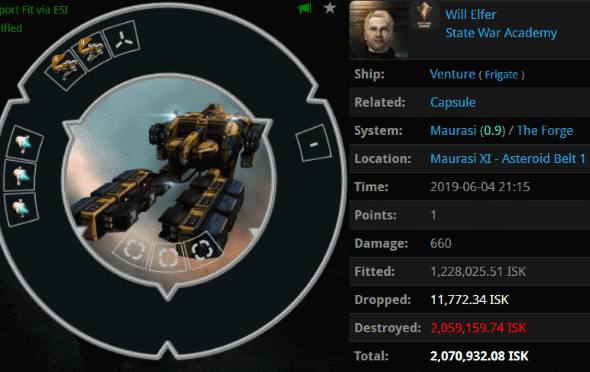 This is a strong indicator.

And yes, he equipped all three of these. A Venture has three midslots, after all; wouldn't want to waste an open slot. (There was no need to put anything in the lowslot or rigs, naturally.)

Here's another strong indicator of Goofusness.

Agent Lewak found himself in an unplanned confrontation with Will Elfer, a twice-confirmed Goofus.

Will Elfer wanted to get Lewak banned for shooting his spaceship in a spaceship-shooting game. Meanwhile, the miner considered himself totally innocent. Lewak was baffled. What game did Will think he was playing?

Does the EVE tutorial teach new players to think they get a free pass for a few weeks (or months, or years) before other players can engage in PvP with them? Everyone's playing the "newbie" card these days.

Moreover, concern for CCP/Pearl Abyss subscription revenues tends to bloom with alarming frequency among the current generation. Needless to say, nobody was concerned with such things when I was a new player back in 2006.

Could it be that the quality of players attracted to EVE has measurably declined in the last several years?

The solution, as ever, is the Code. If low-quality players are joining EVE, then we must do our best to mold them into proper citizens--or to drive them out of highsec. Agent Lewak deployed the name of the Saviour of Highsec a second time. The miner already showed multiple signs of being a Goofus. Time to confirm it with his reaction to hearing my name again.

The outlook for Will Elfer was poor. Each time he read "James 315", he increased his use of capital letters.

Potentially even more concerning: The word "FUCK" was growing as a percentage of the miner's total vocabulary.

Lewak paused, hoping for the miner to calm down and catch his breath. The miner sent a follow-up EVEmail:

Did a GM really call one of our Agents an "idiot"? Doubtful. If Lewak was considered an idiot for ganking a miner, what would a GM call the guy who lost his triple-afterburner Venture and filed a petition over it?

By this time, our Agent considered that the miner had become deranged. Perhaps Will Elfer would enjoy a nice mobile game instead.
Posted by MinerBumping at 18:02