Previously, on MinerBumping... Ali Belette profaned the asteroid belts of highsec by mining in a Talos. Agent Guybertini put a stop to Ali's madness, only to be rewarded with a barrage of complaints and accusations.

Our Agents are known for their patience and compassion--and also for their truthfulness. Guybertini called the miner out on her character flaws.

If you want a miner to confess his crimes, talk to him. Ali admitted that she'd already read the Code. Pleading ignorance was off the table. 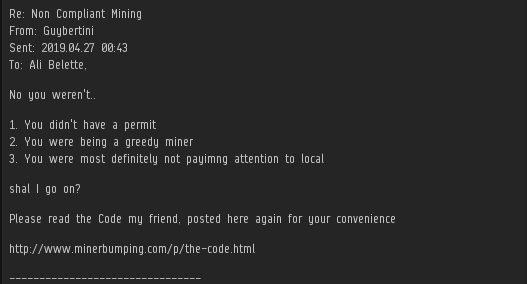 Having accepted the Code as the standard, Ali would now be judged by it. The walls were closing in.

Though Ali had read the Code (supposedly), she clearly had not absorbed it. She didn't even know that highsec was in the territory of the New Order of Highsec.

Guybertini won the debate; he soundly defeated the miner on all points. If Ali cared about preserving whatever was left of her dignity, she would quickly and quietly buy a mining permit.

Ali refused to give up. Well, sort of. She declared her intention to quit EVE forever, which I suppose counts as giving up.

Our Agents have learned that sometimes a miner will fail to quit EVE even after promising to do so. Guybertini continued to correct Ali, just in case she stuck around.

Protip for all the miners: These are not good reasons to mine in a Talos.

Agent Guybertini refused to take the bait. If Ali wanted a positive EVE experience, it was time for her to listen and comply.

For some reason, Ali thought she was being generous to her fellow miners by sucking up as much ore as possible. But those who truly care about highsec know that ore respawn rates are unimportant. An asteroid belt's value comes from the Code compliance of everyone in the system.

Rather than allowing Guybertini's wisdom to seep into her brain, Ali buried her head in the sand and blocked him.

...And then she went to work on sending me the rant that appeared in the Highsec Miner Grab Bag. Let us revisit the final paragraphs of said rant:

According to Ali, her plan all along was to become a PvP'er. Like so many other miners with similar plans, she kept putting it off--she needed "just a little more isk" before she could begin. Ah, the self-deception of the highsec miner! When Guybertini strode confidently into her life and gave her a taste of PvP, she reacted badly.

Our Agents only have eyes for the truth. Those who wish to succeed in EVE would do well to heed their words. Always!
Posted by MinerBumping at 18:03