How do you say "Highsec Miner Grab Bag" in Chinese?

And that's how you say it in English. Welcome to the latest edition of the Highsec Miner Grab Bag!

Our Agents are known for their persistence. Given enough time and effort, almost anyone can be rescued and trained to obey the Code. 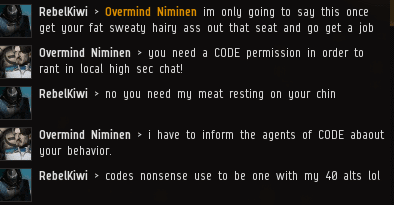 ...In some cases, they can become an Agent on 40 accounts.

According to Google Translate, this message translates to "Go to the forest." I like to think that in the Russian mind, lowsec is a great, untamed forest.

Three tearmails for the price of one Retriever. Not a bad deal, but the guy still owes our Agents 10 million isk.

Cagalli Atha's tearmail was poorly written. Is he going to pay or not? Miner, work on it and get back to us.

Watch out, we've got a live one. Space lawyer Jane Cromwell wrote again the next day: 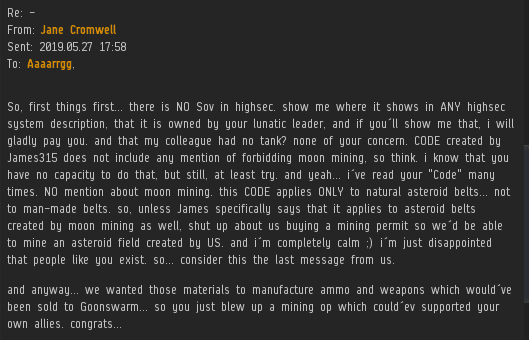 It applies to asteroid belts created by moon mining as well. 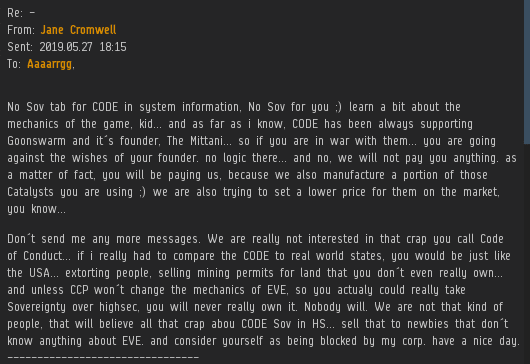 Alas, Jane could not keep up her facade. She scolded Agent Aaaarrgg for "not following his own Code"--and then she admitted that she didn't care about the Code anyway. She was a Goofus all along!

I'm sure the Goons will be disappointed to learn that their chief weapons supplier is out of commission.

"Keep your fucking dogs on a leash"? What do you think our Agents are trying to do to you?

Smoking may be hazardous to your health, but autopiloting definitely is.

As I have often explained, the Code is not a cult; it is the legitimate governing document of highsec. I guess that explains the mystery of its longevity, eh?
Posted by MinerBumping at 18:01