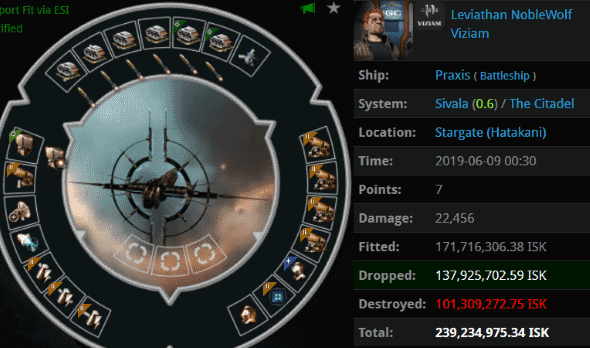 Leviathan NobleWolf was punished for failing to obey the Code. Leviathan's crimes were severe; his Praxis battleship had an even worse fit than is apparent from the screenshot above. But we'll return to that a bit later.

On occasion, anonymous miners will brag about not seeing any Code enforcers for months or years at a time. They claim that we're nowhere to be found, and that we have no impact on the game. And yet, somehow, our Agents always manage to gank people "on my first day back" or "20 minutes after I bought my ship". Interesting.

Leviathan wasn't pleased to see the progress highsec has made during his four-year absence. Strangely, despite our Agents never mentioning reimbursement, the carebear assumed that the gankers might buy him a new ship. Where did he get that idea?

Our Agents had no choice but to lecture the carebear, who was still acting like he didn't know about the Code. A note to any other would-be Rip Van Winkles: In 2015, the Code was already all highsec could talk about.

Has Anti-Ganking given up entirely? The anti-Code resistance must be in a sorry state if the highsec carebears are looking to the Goons for help.

The carebear took great pride in his dead ship. He saw the vanquished vessel as proof that he was better than the lowly miners. Time for Agent Viirilithizu Ward to take a closer look at the Praxis killmail.

It was a good thing our Agents ganked Leviathan when they did. His ship might've caused a scandal. What possible excuse could this carebear offer?

"Kinda new to the game somewhat." Is that the new version of "new returning player"? 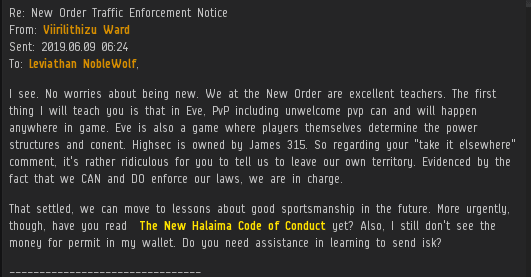 The not-a-miner went silent. Leviathan only said one true thing all day: He had no clue what does what. Fear not, Leviathan: You can learn about heat sinks another time. The first thing you need to learn about is how the Code works. Because the Code does everything.