Crazy Ivan. Looks like we need another edition of the Highsec Miner Grab Bag!

Inconveniencing someone enough to change their behavior--one might say that's a decent definition of "power".

When I received this EVEmail from T FOXT, I had a feeling it might contain tears. I went to Google Translate for confirmation:

"Laozi Gao’an is playing hard, but also has to approve your waste? Do you think your Obama? Still Jesus? Don't take yourself too seriously, and learn to bite people. I am a wave of people who are 24 hours a day."

Somehow, saying that you're "a wave of people" sounds less silly than "I have powerful friends in nullsec."

A few days later, I got another opportunity to test Google's translation capabilities:

"Waste, wait for you to continue to install B high overnight. Waiting for your CODE silly dog. Why don’t you dare to go out?"

This seems like a good time to remind everyone that the Code is available in Chinese.

Though Alpha 2 Crendraven sought to infect the system with his negativity, the Code was just too powerful:

Another victory for the New Order! Carebears, think about that the next time you feel like speaking ill of the mighty CODE. alliance in local.

Apparently newbies are too far below the level of "subhuman trash" to stand a chance in PvP against them. 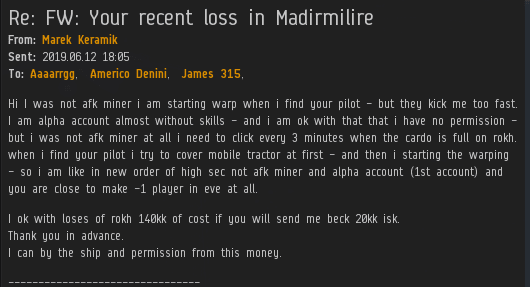 If Marek Keramik's message is confusing, all you need to know is that he was punished for mining in a battleship. Needless to say, his reimbursement request is denied.

These miners are getting ridiculous. At this point, invoking one's newbie status is a separate Code violation in and of itself.

Althelus Rif'tun thinks it's unreasonable to expect a miner to have read a MinerBumping post from four years ago. I disagree. I mean, they've had four years to read it. It's not like the post was made 5 minutes ago and they haven't had a chance to look at it yet. 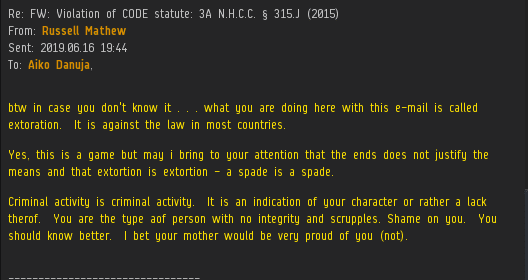 What this miner doesn't understand is that highsec isn't "most countries"--it's New Order territory. In highsec, mining without a permit is against the law.

Miners, you can do your part to reduce the GMs' workload by buying a permit instead of filing frivolous petitions.
Posted by MinerBumping at 18:05