Over One Trillion Eight Hundred Seventeen Billion in Shares Sold 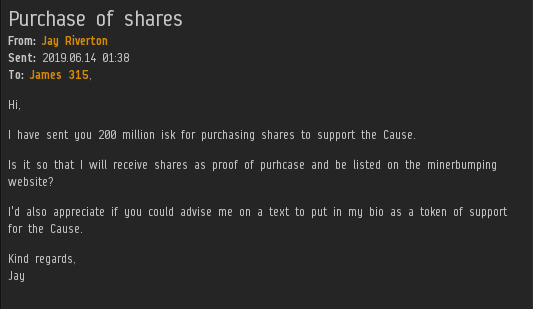 People often ask me about bios, especially in the context of mining permits. I encourage you to take a look at our Agents' bios and the mining permits contained in the bios of any Code-compliant miner. Enjoy!

Dragoncrusher Kei does it again! He bought yet another 1,000 shares and earned yet another Supreme Protector's Tip of the Hat™. His brave act took us past the 1,812 billion isk mark. That's not déjà vu you're experiencing--it's progress! 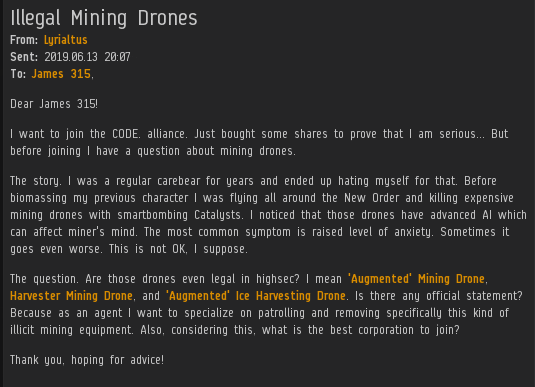 Lyrialtus stepped up and became a New Order shareholder with a big purchase of 4,315 shares. We have now surpassed the 1,813, 1,814, 1,815, and 1,816 billion isk marks. As his reward, Lyrialtus receives a glimmering Quadruple Supreme Protector's Tip of the Hat™.

And to answer his question about blingy mining drones: Burn them all.


Another milestone: Selaf Rademosci's purchase of 300 shares took us to the 1,817 billion isk mark. Is it my imagination, or is the 2 trillion mark feeling closer every day? For now, though, join Selaf in taking a moment to appreciate the Supreme Protector's Tip of the Hat™ that was bestowed upon him. 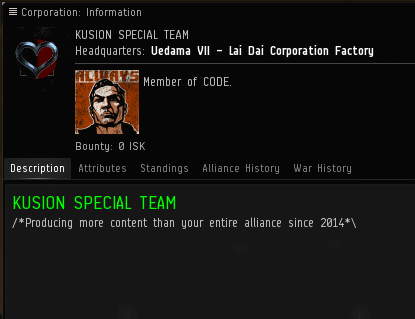 Carebears, if you see these guys in local, you had better be on your best behavior. In fact, even if you only see one Kusion, get into compliance ASAP.

Take Agent Jason Kusion, for instance. You see that unassuming little "20.00t" printed in the corner? This week Jason Kusion marked twenty trillion isk worth of damage inflicted against bot-aspirant vessels during his career.

Twenty trillion is a lot.

Jason has assisted with the destruction of thousands of freighters and hundreds of jump freighters, among many other kinds of bling-boats. So, I suppose the question for all of you unlicensed carebears out there is, what makes you think your freighter is going to survive the Kusions?

Go on, think of a good answer. I'll wait. In the meantime, buy a mining permit.
Posted by MinerBumping at 18:02