You only have one chance to make a good first impression.

...And one chance is all our Agents need. 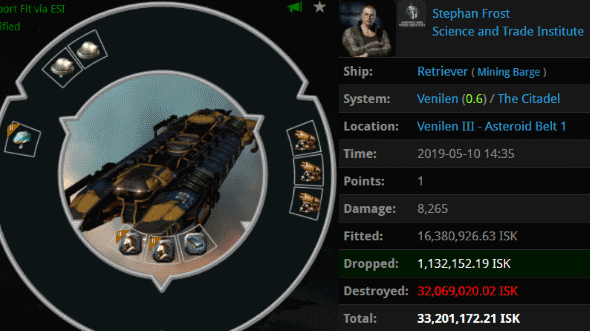 Stephan Frost was caught in the act of unlicensed mining and was punished accordingly. Despite his name, he was mining ore, not ice. 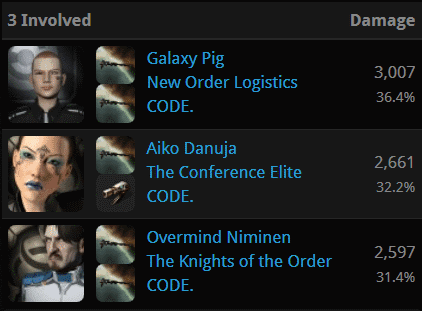 The Agents who brought Stephan to justice were Galaxy Pig, Aiko Danuja, and Overmind Niminen. (Yes, Overmind switched back to our side--again.) The three Agents inflicted their damage upon the Retriever almost evenly. Now the three would share responsibility for teaching the miner how to obey the Code.

Our heroes caught Stephan in a bad mood. He was having money problems, it seemed.

Considering that they only care about making isk, an awful lot of highsec miners are poor.

The Agents gave Stephan the chance to buy a mining permit. He absolutely refused. He claimed he would never pay. Our Agents were more optimistic about it.

Stephan was triggered by the name of the Saviour of Highsec. Something about it bothered him. There was a good chance that Stephan was a Goofus to the core. Our Agents had their work cut out for them.

Moreover, the miner showed signs of being an anarchist--and likely a nihilist, as well.

Stephan was a miner of the "I was going to pay, but now I won't" variety. But if he didn't even recognize highsec's ruler, why would he have paid, even if asked?

In situations where a miner genuinely lacks the money to pay for a permit, he should pay our Agents whatever he does have, and then get the rest as quickly as possible from a legal source (e.g. lowsec, borrowing from a friend if he has one, scamming in Jita, etc.).

The odds of getting this miner to buy a permit seemed remote. It was as if someone had poisoned him against the New Order--probably an anti-Code rebel of some sort. Was there any hope for Stephan?