Pop quiz, hotshots! You come across someone in highsec who's sitting around AFK on two accounts: One pilot in a Sabre, the other in a Buzzard. You have a single Catalyst to spare. Which ship do you gank? 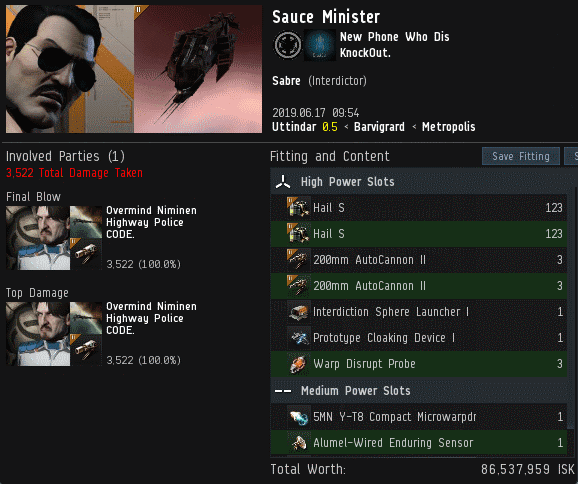 If you're Agent Overmind Niminen, the answer... 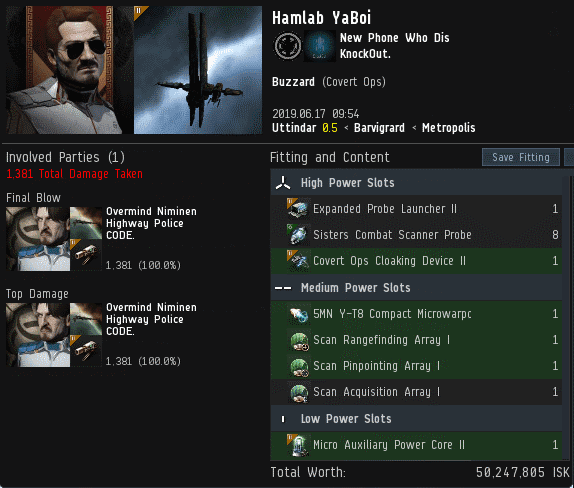 After the AFK'er returned to his keyboard, he wasted no time in confessing his crimes.

Alas, Hamlab YaBoi hadn't become any less of a Goblok upon confessing. He refused the joys of the Code.

Additional Agents reported to the scene, just in case their assistance was needed. The New Order is a family, after all.

One advantage of ganking multiboxers: You can provide helpful lessons to multiple accounts in a single post-gank conversation.

Hamlab attempted to banter with the Agents. Was he a good sport about being ganked, or was he merely concealing his resentment? Sometimes carebears with big egos don't want to express their true feelings.

Hamlab's ego was tested further: Agent Overmind let Hamlab know that he viewed him as being no better than a typical highsec carebear.

The carebear was a bit star-struck. After all, he was dealing with EVE's most extraordinary players. Nevertheless, Hamlab's bitterness toward the Code began to ooze from his mouth.

Agent Ange des Larmes had no time for any "ganking is bad for new players" nonsense. Highsec's greatness was at stake.

The carebear's studied nonchalance crumbled away. His tears flowed freely. 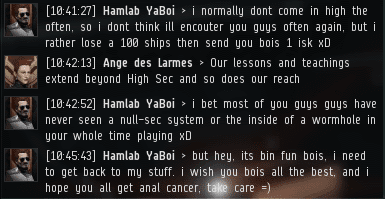 Nothing false can long survive when faced with the shining light of the Code. No wonder carebears of all stripes have spent years begging CCP to nerf us.
Posted by MinerBumping at 18:01