Previously, on MinerBumping... Aeryn Hanaya of dontcare Corporation lost a blingy Hulk when she certainly should've known better. Agent Aiko Danuja investigated the matter by attempting to form a bond of trust with the misguided miner. 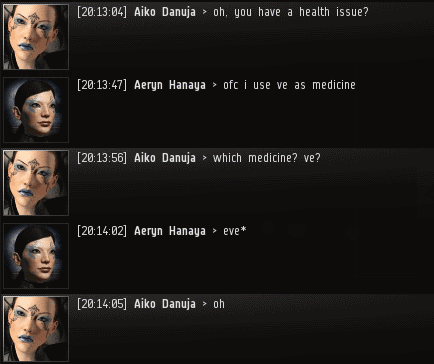 The miner cautioned Aiko not to push the Code on her too much. Aeryn didn't want any bad interactions with the prescription Veldspar she was currently taking. 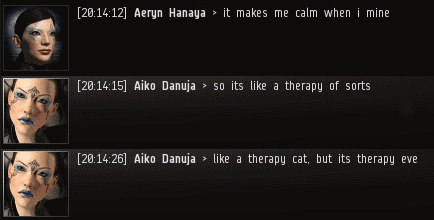 Our Agent had to take care before bringing up the mining permit issue again. Some miners spook easily.

How long before Miner Bingo quotes end up in a medical journal? 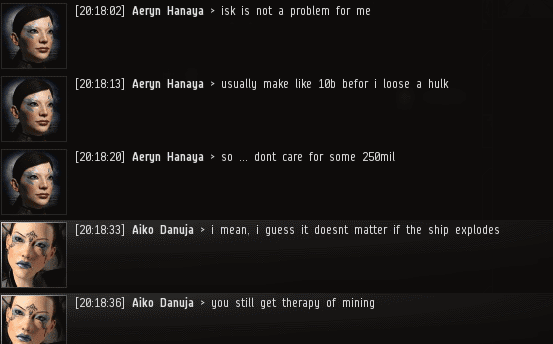 Aeryn attempted to justify her bot-aspirancy with math. But she'd lost 1.7 billion isk instead of buying a 10 million isk permit. Miner math is the fuzziest kind there is.

One must wonder: Is mining still relaxing if you're AFK? If so, could Aeryn relax while AFK without mining?

There was enough of a rapport between the miner and the Agent for Aeryn to speak openly about her treasonous--but idle--thoughts.

(Speaking for myself, I'd be more comfortable in a building constructed by an Agent.)

Aeryn was defiant and defensive. For some reason, there are highsec miners who think that their mining operations matter. They feel ownership of the little bits of ore that they toss into the gaping maw of the Jita market.

Aeryn was convinced that dontcare Corporation was the main supplier of ships in the sector. It wasn't clear what Aeryn thought a "sector" was, but anyone in the sector would definitely notice if she slowed down production of her "line". 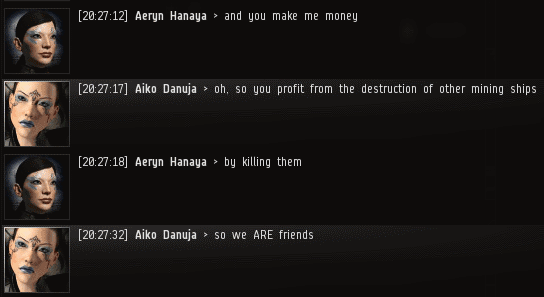 Agent Aiko took the miner down with a bit of verbal judo. Permit time?

Alas, Aeryn's encounters with the Code had somehow resulted in her becoming more withdrawn and paranoid.

The miner no longer believed that mining permits were useful to her purposes; she had a completely different understanding of what permits are for. I've said it before, and I'll say it again: New Order permits are not a license to violate the Code and spend all day indulging in medical mining.
Posted by MinerBumping at 18:04