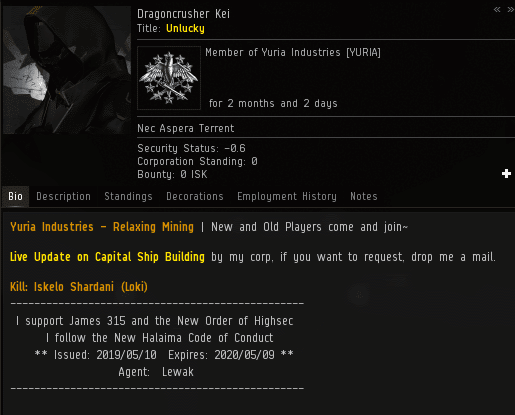 His bio advertised a corporation with "relaxing mining". But somewhere along the line, Dragoncrusher Kei came to the conclusion that the Code is the only way forward for highsec. 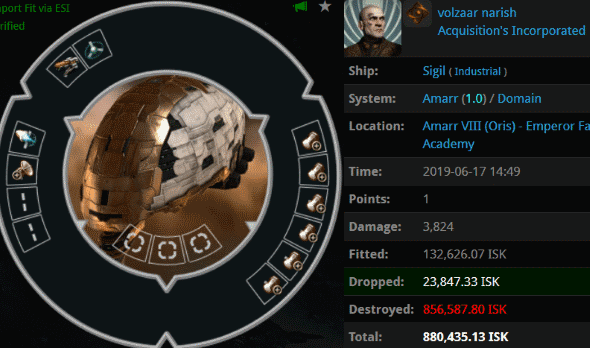 Maybe it's because he saw people flying ships like this. 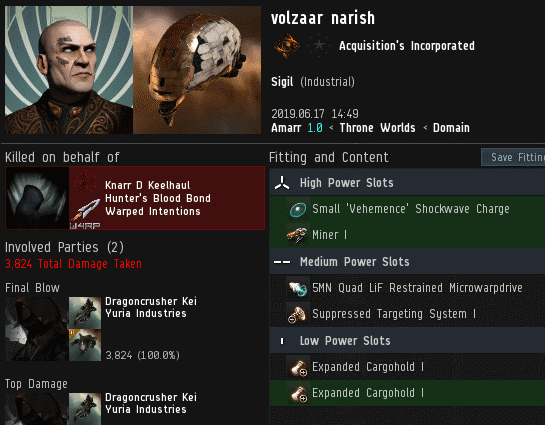 Our Agent didn't even need to gank the miner/hauler; he was AFK with an active kill right.

According to valzaar, his carelessness cost him everything he possessed in EVE. Among highsec carebears who violate the Code, this is a common fate. It makes you wonder why anyone would risk disobeying the Code. (The answer is bot-aspirancy.) 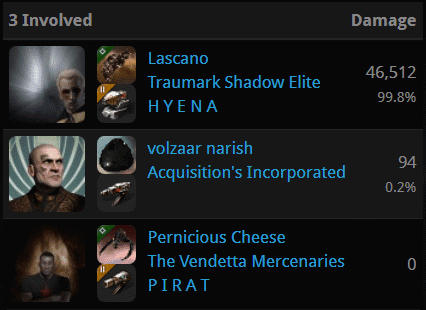 Dragoncrusher suspected that there was more to this doe-eyed newbie's story. Two days earlier, volzaar had attacked another ship in highsec. Hence the kill right.

No EVE player is so new that he can't tell an Agent the whole truth. volzaar had a lot of explaining to do. For starters, what was the real reason he didn't own a permit?

The miner's first thought upon looking at my profile wasn't "what a handsome face" or "there's the man of destiny". Instead, his first thought was isk-related. That is a red flag. 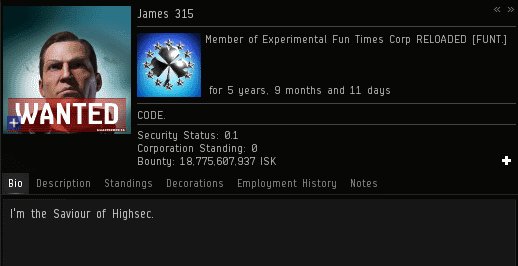 (In case you were curious about the bounty.)

The mind of a miner tends to drift. Our Agents work hard to keep them focused on the task at hand.

Agent Dragoncrusher gave the miner specific instructions. Would volzaar follow them, or would he concoct some one-sided nonsense to send to the Saviour of Highsec?

I've long advocated for Code-related information to be added to the EVE tutorial. But newbies frequently complain about not having enough isk to buy a permit anyway. Should CCP/Pearl Abyss add a mining permit to the new account "starter pack"? Instead of selling skill points to newbies, they could make it so that 10 million isk is automatically forwarded to me each time someone buys a starter pack.

Seems like it would be a solid addition to the new player experience, no?
Posted by MinerBumping at 18:04