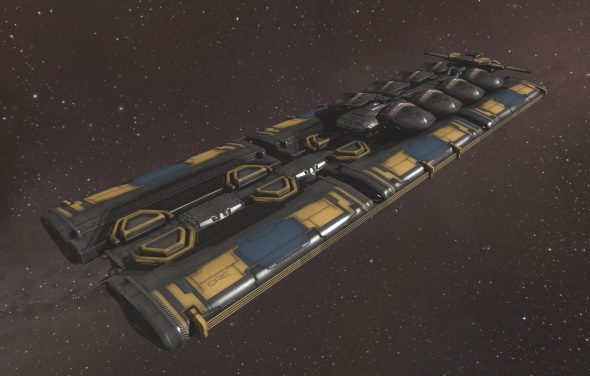 In recent years, the Orca has become a favored mining ship among some bot-aspirants. Though it requires more isk and skillpoints than a mining barge, the Orca is nevertheless popular due to its ability to mine with drones while the pilot is AFK for long periods of time. 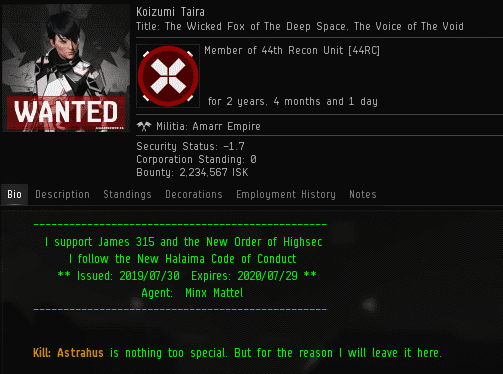 Agent Koizumi Taira noticed some Orcas operating in highsec and became curious about them. She was especially intrigued by reports that bots and bot-aspirants fleeing the Nullsec Blackout of '19 were using Orcas to mine illegally in highsec.

She decided to study them. But how to go about it?

Agent Koizumi grabbed a bumping ship and began to apply bumps to a group of Orcas she found mining in an asteroid belt. After some time, one of them woke up and attempted to communicate.

The first of the Orcas was a bit groggy upon being bumped from her slumber. Though Koizumi was merely bumping the Orcas out of drone range from the asteroid belt, the miners grew fearful that our Agent might be lining up a gank. They docked up.

Koizumi was fascinated. Later, she came upon a group of nearly a dozen Orcas all mining together. At first, it seemed as though they were content to be bumped out of range--until one spoke up.

Sabanto, too, was in a grouchy mood when he returned to his keyboard. Koizumi applied additional bumps to his Orca and the others nearby.

The Orcas struggled to cope with the bumps, and they managed to lose their mining equipment. But could they be reasoned with?

Sabanto and his friends/corpmates/alts grew agitated. In theory, they could have simply relocated to another system. But because they were creatures of habit/programming, they docked up instead. They would cease mining until they were confident that Agent Koizumi was gone for the night.

Safe in his station, Sabanto attempted to defend his honour. He was not a bot; he merely allowed his ship to conduct automated mining activities while he was away from his keyboard. What was wrong with that?

The more the miner tried to defend his actions, the more he condemned himself. Sabanto admitted that Orca mining is, for all practical purposes, indistinguishable from botting.

Sabanto further claimed that he wasn't multiboxing the Orca miners, and that the rest of them belonged to his friends. However, the friends did not speak in their own defense, choosing instead to remain silently docked up. Agent Koizumi recorded her findings and moved on to the next system.

Discovering a pair of Orcas, Koizumi bumped them until they showed signs of life. They, too, retreated to a station and docked up.

In the next system, our Agent bumped Orcas for several minutes until they began to protest. Following the pattern of the previous experiments, the Orcas chose to dock up soon after they realized they were being bumped.

Bot-aspirant Orca miners are a strange breed. Agent Koizumi was pleased by the progress she had made, but she concluded that the phenomenon of the highsec Orca requires much more study.
Posted by MinerBumping at 18:04